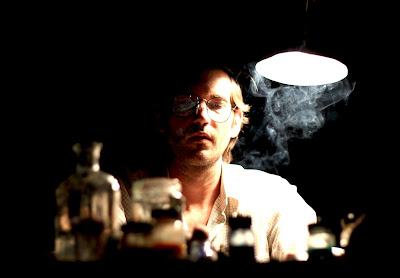 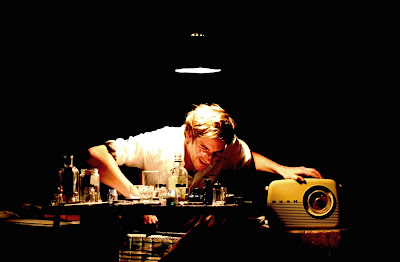 The title of the show comes from a poem by W.S. Graham, "Lines on Roger Hilton's Watch" and refers to the dead of night.

We are introduced to Roger lying on his bed. There is a bottle of whisky nearby and pots of paint, discarded paper and other rubbish is strewn about the floor. Magically the radio suddenly comes to life and is offering Roger the chance to be on Desert Island Discs.

As Roger, Dan Frost cuts a lanky and awkward man fumbling around in the darkness moving from painting to musings about pickles. It is an intriguing performance as he moves about the space that is his tiny room. One moment he is talking about music and the next he is talking about his experiences as a young man in France. And George Haynes as the man on the radio proves an equally entertaining foil.

Written and directed by Eddie Elks, you feel as if you get a real sense of Roger and his struggles as art, women and past experiences collide. Adding to the atmosphere is the evocative lighting by Christopher Nairne and set design by Ken McClymont.

Botallack O'Clock runs at the Old Red Lion Theatre through to 6 February.