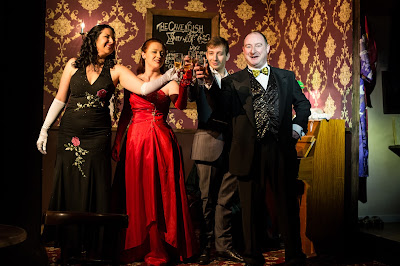 Backstage antics at a pub theatre in Barnes never felt so mild or bemusing in Dress Rehearsal. But while the drama is a little flat the music and production values make up for it. It's on for a short run at the OSO Arts Centre.

Dress Rehearsal follows five performers and their rivalries, failures and ambitions. What happens backstage spills onstage as the drama leads into music and then back into more drama. 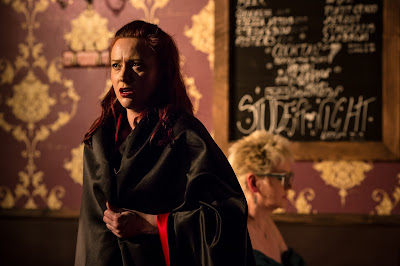 Bella (Amanda Wagg) is the faded diva that runs the show. There is a fruity old tenor called Lionel (Tony Baker). And a camp young upstart Kit, played by Luke Farrugia who sings opera and can tap dance. But it is Steph (Alexandra Cowell) who has a secret and the one who keeps the troupe together. It turns out that her secret had to do with throwing away a promising opera career over a case of nerves many years ago. 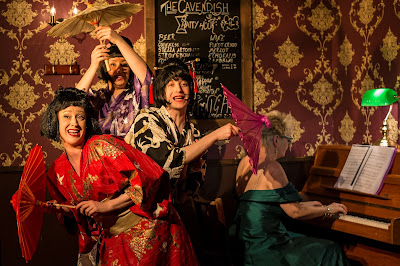 Perhaps Barnes is such a civilised little part of London that it might be immune to the harsh economic realities facing the rest of the city. Pubs are closing left right and centre. Theatre pubs are an even rarer breed. The ones that are surviving have an eclectic programme to keep the punters coming in. Productions are often profit shares and so it makes it difficult to cobble together a living from it. All this seems much more worthy fodder for an evening exploring backstage antics than a case of stage fright...

But even if the acting is suspect and the drama nonsensical, the singing isn't bad. And at times it is funny such as when Wagg, Farrugia and Cowell don some fabulous kimonos and sing Three Little Maids. Music direction is from resident Ritz Hotel pianist Karen Newby. She also plays the role of Phyllis, a Harpo Marx-like character added into the proceedings for reasons I didn't quite understand.

If there are any little opera companies struggling to fill out their season, they could take inspiration from the piece. It just needs to be funny, or have engaging characters.

The OSO Arts Centre in Barnes is a new community run space. It is carved out of a new development of smart looking flats and shops. The shops include restaurants, dental surgeries and beauty treatment rooms. If you're not a local it isn't the easiest of places to find at night. After wandering around trying to find the entrance, it was tempting to give up the search and go for a teeth whitening and wax. It is at the rear of the development (facing the duck pond).

Anyway here's hoping they can find a niche for programming. It would make a nice home for a small opera troupe. And it has the nicest seats of any fringe venue...

Dress Rehearsal runs at the OSO Arts Centre in Barnes until 20 February.