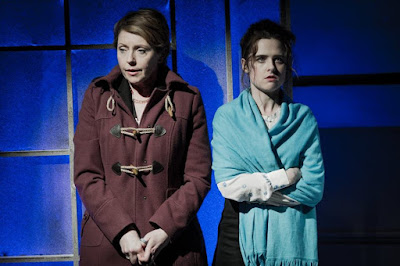 I have a sister so I have witnessed a few mother-daughter conversations over the years. But pehaps none are as odd as those presented here in Merit by Alexandra Wood. It is currently playing at the Finborough Theatre.

It's a two hander that explores the growing apart between a mother and daughter. And the growing gulf between the rich and poor. But you are never sure whether the global financial crisis, inequality or just good old fashioned mother-daughter rivalry is what is at play here. It is ambiguous but it is also a compelling study of a parent who wishes her daughter every success. But she'll also be there to take her daughter down a peg or two if she gets too successful... 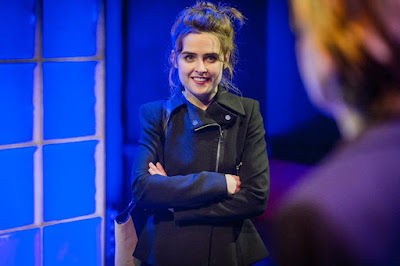 Set in Spain, the play opens with Sophia landing a job as a PA to a banker. Her mother thinks she got it by offering sexual favours given there are so many people out of work. This causes friction between the two that never is resolved. But as her mother's own circumstances change, she turns to her daughter. First for financial help, and then as she joins an anti-austerity group, for more different support.

It is a pity that as a two-hander you don't get to appreciate how desperate the Spanish economy became during "the crisis". Some scene setting might have helped explain how bad things got. Afterall there is a reason as to why so many young people working in London speak Spanish. 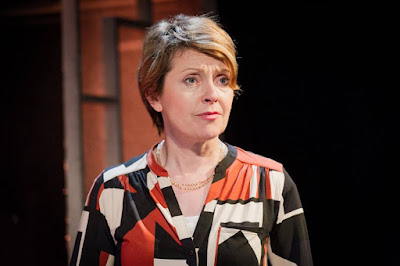 But while the work may be a little vague, the performances give the piece tension. Karen Ascoe isthe middle-class mother Patricia. She is driven to desperation by her own circumstances, the financial crisis and a sense of injustice. It's a terrific character and she plays it so chillingly pleasant.

Ellie Turner is her match as the angst-ridden yet ambitious daughter, torn between loyalty to her family and wanting to make it on her own.

It is a topical piece as well about youth unemployment. Just this week it was reported that youth unemployment in Britain (unlike the rest of Europe) is at its lowest since 2004. Although it isn't PA work but The Uber or gig economy that is is driving this change. Fast forward a few years later and maybe Patricia might have been rallying against Uber and Deliveroo too... Now there's an idea for a sequel...

Merit by Alexandra Wood and directed by Tom Littler plays at the Finborough until 26 March.