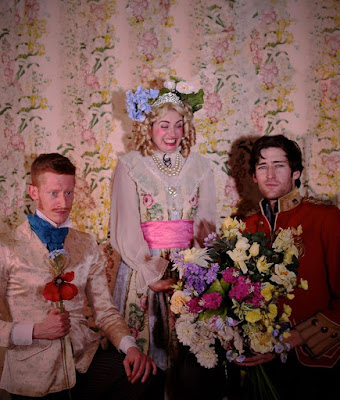 Social climbing in the Victorian period has never seemed so much fun as it is in The Young Visiters.

It is a new adaptation of Daisy Ashford's book adapted and directed by Mary Franklin and presented by Rough Haired Pointer.

It is a world where ladies are pale owing to the drains in the house. Or where one can say “I had a bath last night so won’t wash much now.”


Daisy Ashford’s book was written when she was nine. The story goes that it languished in a draw until as an adult she found it and had it published in 1919. It is a child’s eye perspective of the silly business grown ups get involved in when falling in love or social climbing.

But its charm is in the innocence and fun that the characters have. Rough Haired Pointer have captured all the silliness of the book. But they have also given it their own signature with high energy and anarchic comedy.

There is tea served in bed (almost literally), horse riding comes with coconuts and there is an awful lot of rice throwing at a wedding. 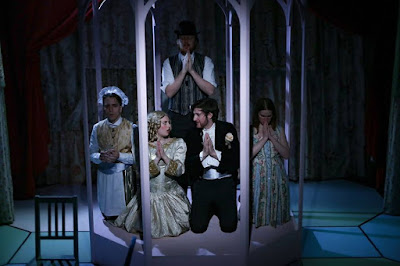 The cast know their comic timing. And there is something about them that makes you think that they could probably elicit laughs just by standing on stage without any material.

Jake Curran as the slightly boring Mr Salteena is a delight with his deadpan looks and hurt feelings.

Marianne Chase as Ethel Monicue is hilarious in her assorted frocks and excessive use of makeup.

Geordie Wright as Bernard Clark is lovely as the handsome and noble Lord. But there is also a manic, scary edge to his performance suggesting that anything is possible after their nuptials.

I still chuckle thinking Rough Haired Pointer's take on Diary of a Nobody. Particularly the the bit where they sent up the bucket raising antics of the Kings Head Theatre. Now I can do the same with women who wear too much "ruge". If only they sold copies of the book at the theatre...

The Young Visiters runs at the Tabard Theatre until 26 March.