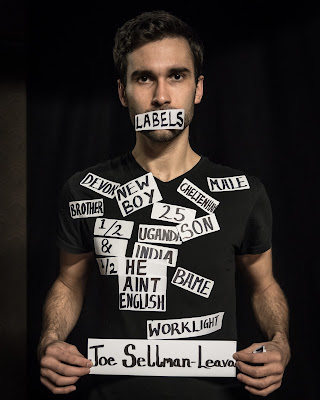 Joe Sellman-Leava's one man show is a fascinating look at how the use of words out of curiosity, fear and hostility have impacts. His power is in his ability as a storyteller to hook you in on his argument and walk in his shoes. In roughly sixty minutes he hooks you in on his story and the story of his family.

Sellman-Leava was born in Gloucestershire but his family has connections to Uganda and India. This background leads to constant inquiries about where he was from. And saying Gloucestershire is not the response people expect. This leads to an exploration about why we seek to label people. 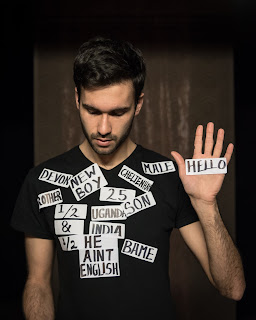 It is an interactive piece too. The audience has the chance to wear labels, take part in a disastrous chat-up on Tinder and make the best paper planes ever.

The central argument he builds is if his family fled conflict in Uganda what is the difference with those fleeing war in Syria? His family benefited from the historical links to the British empire and having British passports was a key difference. But he has a point.

It is a simple production using a suitcase for a prop and lots of black and white labels. This underscores the point of the piece, but a further possibility would be to have more visuals or photos to support his story.

Still it is a great piece and worth catching. Sellman-Leava graduated from the University of Exeter in 2010 and is the co-artistic director of Worklight Theatre.

The work was inspired by a workshop led by Emma Thompson at Exeter University in 2009. It was inspired by the ongoing migrant crisis in Europe and the bitter debates around migration and refugees.

Thought provoking, charming and funny. This piece won both the Scotsman Fringe First Award and Holden Street Theatres' Edinburgh Award. It was also shortlisted for the Amnesty International Freedom of Expression Award. It runs at Stratford East in their terrific new 80 seat theatre space which aims to showcase new works such as this.

Playing until 30 April. A tour at various locations across the UK and beyond follows.