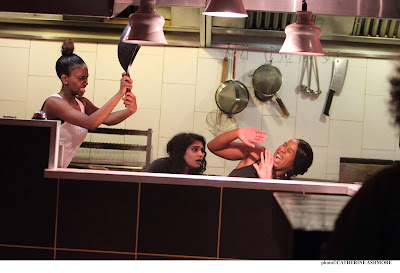 Early on in Knife Edge, the cast bursts into chanting this. Soon there is a driving percussion backing it and it sounds like it is not just a call to eat but a way of life. And so unfolds a tale written by David Watson and directed by Maggie Norris about a girl with big dreams and more than a few issues.

The piece is produced by The Big House. It is a charity that helps young people in care to fulfill their potential. Almost half of all prisoners under 21 have been in care and the charity uses drama, mentoring and support to tackle breaking this cycle.

Over 12 weeks they developed the piece and the cast - most have never acted before - worked to devise the production. The story is set in east London. A “Girl With No Name” (Tezlym Senior Sakutu) has been in care since her mother died when she was eight. A chance encounter with her step-siblings and a crazy chef named Ralph (but pronounced “Ray-fe”) may turn her life around. But anger and a bit of a dodgy past may conspire to be her downfall.

There are some great performances by the young cast, including Taurean Steele as Ralph. His attempts to explain he is running an Hawaiian restaurant (in Dalston no less) is hilarious.

It is hard not to like a show with big dreams and big ambitions even if things do not always hang together. Maybe more music would help.

It looks great too. It is a promenade production and you move through different parts of the restaurant. There are some clever uses of lighting and space here as well.

Part of the ticket is also a post-show feast where the audience and cast can come also together and discuss the issues of the piece. And it isn't just chicken and chips. After all, that's Nandos...

Knife Edge plays at the Pond Dalston through to 12 June. You can find out more about The Big House and its activities at its website.