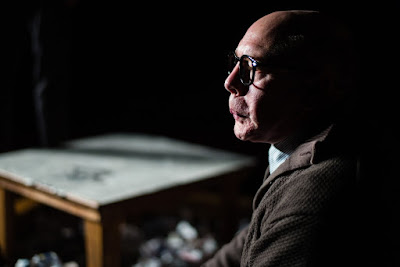 There is always someone that has to takes something too far... Usually it is a joke. Here in Christie In Love, the central message seems to be that Christie's penchant for weird sex practices was a step too far. His punishment was execution. This seemed fitting for a man who indulged in that... And mass murder.

Rough Haired Pointer attempt to understand the motivation of a seemingly dull serial killer John Christie in this production now playing at the Kings Head Theatre.

You get the sense that there is a lot more that this piece could have told. Written in 1969, back then there was probably a greater awareness of the details of the case. This production doesn’t let you in on that.

The play runs about an hour and calls for the action to be played very slowly. This emphasises the tedium and ordinariness of the man committing the horrors and those uncovering it. But it isn’t always easy to watch and may not to be everyone’s taste.

Still for those who are game, there is much to admire. The cartoon police constable (played by Daniel Buckley), is digging the garden looking for evidence and reciting dirty limericks all the time. The pragmatic Inspector (Jake Curran) keeps an emotional distance from the horror. 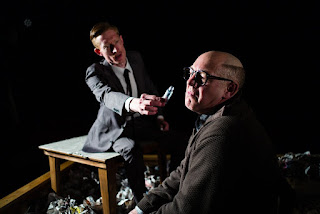 And then there is Christie. Played by Murray Taylor he isn’t the typical monster. Balding, wheezy and ordinary. With his plimsolls he moves about barely noticed by anyone. The Mister Cellophane of 1950s London, he becomes a chilling and disturbing portrait of a killer.

Along the way there is casual mention to the miscarriages of justice, botched police investigations, war service and disability.

It is a simple yet slick production. A wire pit of newspapers. Old newspapers, is evocative. It is the stuff he wrapped his victims in. It is the source of the salacious stories about him... And it's nice to see someone has found a use for the Daily Mail and Express...

A clever short piece given a stylish theatrical treatment by Rough Haired Pointer. Worth a look. But brush up on your post war serial killers first and be prepared for the unexpected…

Christie In Love, directed by Mary Franklin runs at the Kings Head Theatre until 18 June.