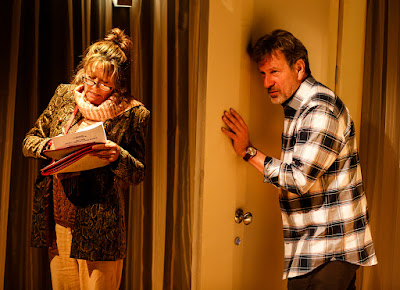 Off The Kings Road. People come, people go. Nothing happens. Or perhaps not much happens. This isn't Grand Hotel in terms of melodrama or scale. Instead, there are two people in their autumn years trying to get over the past and move on. Oh and there is a hooker, a camp hotel clerk and a dodgy psychiatrist to Skype with.

It is an interesting concept. But you get the feeling this small-scale production feels a bit crowded with all these characters. Perhaps played as a two-hander it might have given us the chance to get to know the two main characters more.

Michael Brandon plays Matt. He has come to London from California for a holiday after the death of his wife. He has brought his Valium, mouthwash and a sex doll. He is a man trying to get over her passing. He has plans to do all the things they would have wanted to do. Go to the park, go to a gallery. Live life. 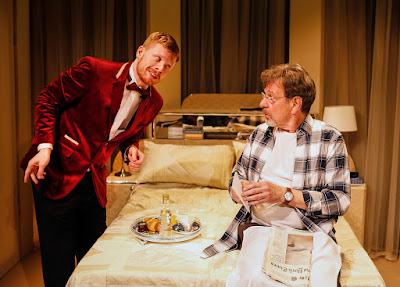 He decides to stay at a less luxurious place in London. For anyone who has searched hotels in London, less luxury is usually the standard. But here the place is called Off The Kings Road. It seems to be single-handedly run by an eager-to-please Freddie (Luke Pitman making a very likable off-West End debut). And unusually for cheap no-name hotels in London, it looks quite smart thanks to the resourceful set design by Claire Lyth.

The only other guest in the hotel appears to be a crazy cat lady called Ellen. Played by Cherie Lunghi she gives the character much warmth. And with Freddie playing match-maker you know that by the end of the piece they are going to get to know each other.

But when you're a widower with issues you are going to get sidetracked. There is always psychiatrist Dr Kozlowski available by Skype (Jeff Bridges - giving new meaning to phoning in a performance). And then there is the lure of the tart cards in every phone box in Chelsea. This is where prostitute Sheena (Diana Dimitrovici) comes in. 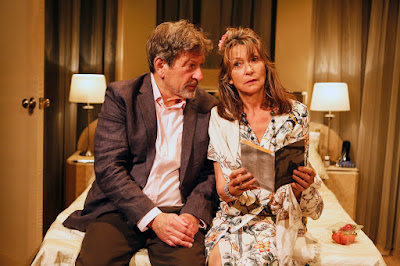 I didn't buy the character of a prostitute, or that he would use one of them to call up a prostitute. Tart cards usually tout women who are often trafficked to work in the sex industry. It does not seem like they should be a side character in a play about a rich man's late life angst.

The piece hangs on the performances of the two central characters. Brandon and Lunghi work well with the material. And it is nice to see a play that tackles the subject of older age, loss and loneliness in a fun way. It would have been better to focus solely on these.

Writer Neil Koenigsberg had a career in PR in the entertainment business before moving into producing and writing. He recently produced a documentary featuring Jeff Bridges. He has also been friends since high school with Brandon.

Directed by Alan Cohen, Off The Kings Road runs at the Jermyn Street Theatre until 25 June. 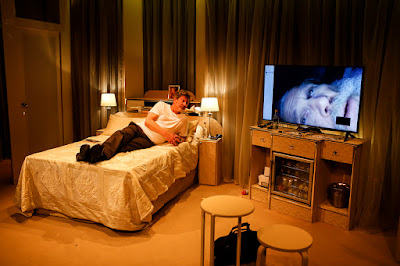