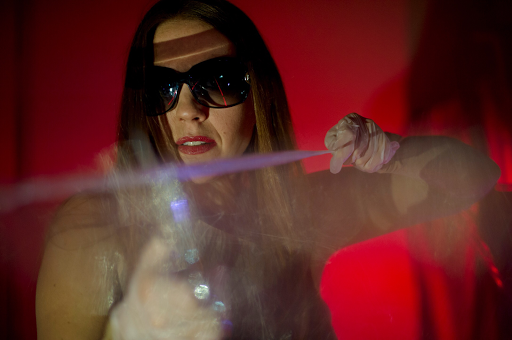 A sensory and unnerving experience awaits anyone heading off to see Cut at The Vaults in Waterloo. A one woman show performed by Hannah Norris. She is your guide, predator and prey in this story about paranoia, obsession and an awful lot of cling film.

Part of the experience of the piece is to throw the audience into complete darkness. With a pulsing soundtrack it makes things feel pretty intense.

The intensity at first is all in your mind. But then Norris throws herself about the traverse stage. She is one place. Then another. And then another. Smiling and grinning. There is a menacing demeanour about her, especially when she tells audience members to take off their glowing watches.

You amost expect that she is going to be in the face of someone when the lights come up shouting at them. The anticipation of that actually happening and imagining my reaction is why I opted to sit in the second row. Mercifully the piece isn’t that cruel to the audience. But it is still chilling all the same.

It is hard to describe what happens however. It just feels creepy. A woman is getting ready for work and then things start to go awry. She is sizing up a man she sees and fancies. But the tables quickly turn and she finds herself being pursued by a man.

At times Norris is a flight attendant. She is like Pam Ann without the crude jokes, asking the audience whether they want chicken or fish. But then things take a nastier turn and scissors feature prominently.

As the story reaches its climax, sound effects, light, darkness and rolls and rolls of cling film evoke the barriers she is putting up.

It’s fascinating and evocative, particularly in the creepy space of the Vaults off Lower Marsh in Waterloo. But the nature of the piece with its fragmented narrative also makes it alienating and I was none the wiser about what I saw at the end of it.

Cut was a hit when it was first performed at the Adelaide Festival in 2015 and then had a run in Edinburgh.

Written and directed by Duncan Graham, Cut runs at the Vaults under Waterloo Station until 31 July.