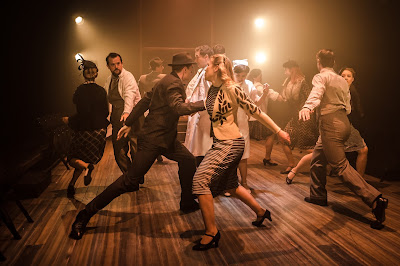 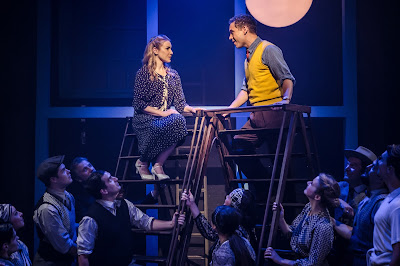 The allegro the title refers to is how many people prefer things at a fast pace to give their empty lives some purpose. There is also a revelation that at the turn of last century (when this piece is set), becoming a doctor was a pretty dead end job - lots of study and no prospect of money for years. The best way to make money was in lumber and the stock market. Well it was until the great depression hit. I'm not sure whether Londoners will see any parallels with the global financial crises or underpaid junior doctors.

But anyway, the story is about of poor Joe, or rather Joseph Taylor (Junior). He is the son of a country doctor and moves to the big city (at the urging of his manipulative wife). He becomes successful by doing a lot of things to make rich people happy. But he remains unhappy with the compromises in his life. Joe could do with a slap, but instead he has his own Greek chorus revealing his inner thoughts. And the songs attempt to capture his emotions, feelings and obsessions.

The music emerges from the drama and feels more like motifs. Each reprise giving further insight into the characters. The number “Poor Joe” starts out as a lament to Joe’s inability to kiss Jenny as a teenager. But it becomes the song to call out his inability to stand up to the manipulations of his wife. If there is a villain in the piece, it has to be Jenny. She starts out just a little pushy but by the end of the piece she has mastered the art of social climbing.

As Joe, Gary Tushaw with his good looks and fine voice avoids him being a total wet blanket. As the social climber and master manipulator Jenny, Emily Bull is delightfully evil. They work well together as childhood sweethearts that turn sour.

Two songs are sung by women that Joe overlooks while dreaming about Jenny. Leah West as Joe's  unlucky college love is a delight. She serenades him that they have nothing to remember So Far. As he falls asleep on her dreaming about Jennie you know that is the way it’s going to be. While Katie Bernstein as the city smart Emily foretells how things will pan out with her sassy commentary The Gentleman Is A Dope. 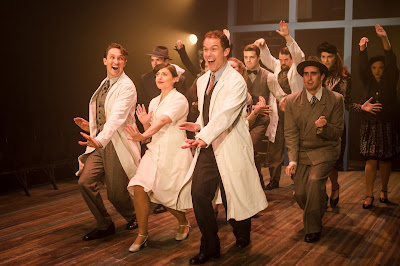 In this piece the chorus gets most of the songs. This must make the show a delight for amateur companies to perform. Here with an ensemble of seasoned performers and newcomers the harmonies sound terrific. Lee Proud’s slick choreography and Thom Southerland’s brisk direction bring all the elements together.

This is a terrific production with a strong cast to bring out the best in this overlooked musical. It may at times feel a bit like Carousel or a bit like State Fair but there is so much energy who has time to think while enjoying the show?

Allegro runs until September 10 at the Southwark Playhouse.