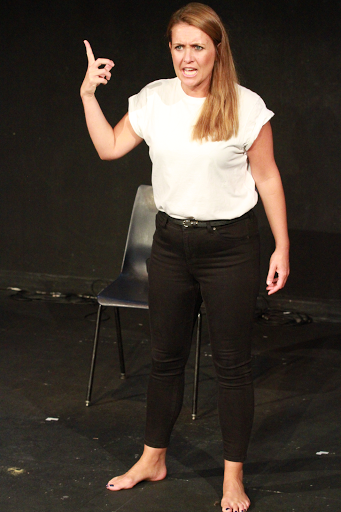 Everything is fiction. Whether it is our post-truth politics, which led the country out of the European Union on the premise of an imaginary amount of money going to the NHS and immigration being cut. Then there is our partisan newspapers shouting political hysterics mixed with celebrity stalking to an ever-dwindling audience. And then there is what we tell ourselves. So is the premise of Emma Packer's fascinating CTRL+ALT+DELETE. It is having a short run at the Camden People's Theatre.
Written and performed by Packer, she first introduces us to Amy. A child of the 80s she reminisces about her love of sport and knowledge of the Spice Girls. She also had a loving relationship with her grandfather and the time they spent together.
But things quickly shift when we are introduced to Amy's mother. Drinking and smoking prior to Amy's birth, afterwards abuse becomes a pattern. The unsettling part of the piece is how this becomes acceptable behaviour and consequences for Amy as an adult.
But the past is the past and both of them play down the horrors of what really happened. At times they look back at fondness at those days, overlooking the beatings, alcoholism and poverty. The piece then attempts to make broader observations about the London riots, the financial crisis and Brexit. Are the lies and deceptions that led to these any different?
As a story-teller, Packer keeps the momentum going throughout its hour-long duration. It's peppered with enough dialect (or to be technically correct, Multicultural London English  to warrant surtitles for the uninitiated into London speech patterns. But it also serves to lure you in before some shocking revelation.
Perhaps the piece could be expanded in future to make it a two-hander. This would give the opportunity to explore the two characters at the heart of this piece more. Perhaps the message about bankers and Brexit serves to remind us that this has always been a divided country.
Directed by Katherine Hayes, CTRL+ALT+DELETE isat Camden People's Theatre until 16 August.
Photo credit: David Packer