Let 'em have it: An Inspector Calls @aninspector 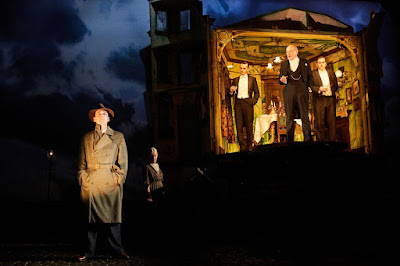 Stephen Daldry’s enduring production of JB Priestley’s An Inspector Calls is back in London. Catching it this time around - the last time I saw it in 2010 did not leave much of an impression as I had forgotten I had seen it -  had me pondering its enduring popularity.

It’s a simple detective story set in 1912. A Detective arrives unannounced to interview a Yorkshire factory owner Arthur Birling (Clive Francis) and his family about the suicide of woman. Each scene serves to rub off a little more of the veneer of respectability of their lives. In what could be a tedious premise, the piece starts making you think about broader enduring issues in this country. Soon I found it evoking the polarised politics of the current day, the rise of fashionable far right politics and Scottish independence. 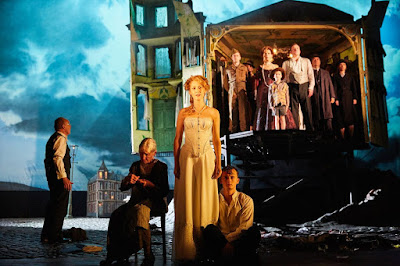 There is the upper middle class family brought to account for their callousness. There is more than a hint about class warfare and social justice in Preistley’s work. And in an era where the gap between the rich and poor is widening this resonates. There is an element of smug satisfaction in watching this family fall from grace.

There is also the strength and resilience of this enterprising family. Even if you are not at first sympathetic to them, the Birlings get all the best and provocative lines. Maybe you shouldn’t be rooting for them, but in this production they are seductive. Carmela Corbett as spoiled daughter Sheila Birling delivers a strong and often comic performance. With her sharp quips and glazing stare, Barbara Marten as matriarch Sybil Birling could be a forebear to Katie Hopkins. Albeit without the sausages. They represent everything you know (and possibly loathe) about England.

Casting Liam Brennan as the inspector is unusual. With his round face and thick eyebrows he bears some resemblance to Scottish National Party MP Alex Salmond. So when he is threatening this English family about consequences I couldn't help but think was this about social justice? Or a second referendum in the light of the Brexit vote?

Characters and performances aside, the star of the show seems to be the production. There is the Edwardian House on stilts. It’s a jewellery box that opens out and then closes at the end. As the family retreats it only reminds you that not much will change. There is the harsh cobblestone reality of the rest of the world in which the inspector drags each of the characters down to be questioned. I could have done less with the soundtrack lifted from Vertigo. For me it evokes 1950s San Fransisco rather than Edwardian England. The pacing also seemed to be off in the last twenty minutes.

But what will leave you is how this piece still has something to say. What it says might depend on what you want to hear.

Directed by Stephen Daldry, An Inspector Calls is at the Playhouse until 4 February 2017. 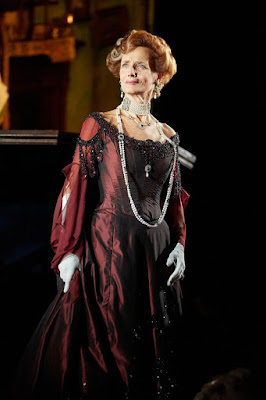