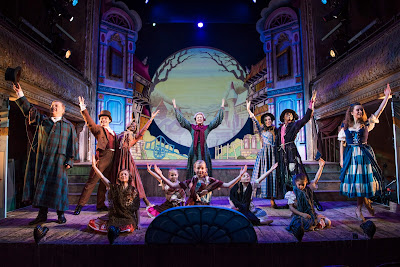 A terrific cast, a fun story and the fabulous atmosphere of Wiltons Music Hall make Mother Goose a panto not to miss this season. Well, if you like that sort of thing...

Roy Hudd writes and stars as the Pantomime Dame Mother Goose. She is an old woman who befriends a rather large and lonely goose. In return the goose gives her riches beyond her wildest dreams. Naturally being a poor old woman of meagre means it goes to her head. She sells her soul and her goose and ends up looking as it she should be in The Only Way Is Essex.

It is an odd story for a pantomime, but it's clear that Hudd and his wife, director Debbie Flitcroft, know the essence of good panto. There is a battle between good and evil, spectacular costumes, audience participation. Not to mention a mix of songs and some pretty hoary jokes and ad-libs. 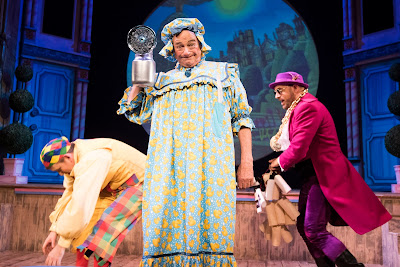 Hudd took inspiration from the original Mother Goose panto created in 1902 for music hall legen Dan Leno. And at various points it feels like you are being transported back to music hall's glory days.

Julia Sutton as the (ahem) slightly mature fairy Virtue shows off some gravity defying high kicks. She also has a couple of fabulous music-hall style songs. Up against her virtuous performance is Vanity played with evil seriousness by Gareth Davies. He has been touring playing Fagin in Oliver but admits he is much better as a Nancy. We would tend to agree, particularly in that purple suit.

Other highlights in the cast include comedian Ian Jones as Willy, Mother Goose's son. He keeps the show moving while Ian Parkin as the stingy squire of the village gives the show another villain to boo.

Mother Goose is at Wilton's Music Hall until 31 December. 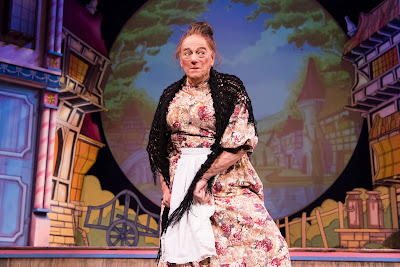 A version of this review first appeared in Londonist.
Photo credit: production photos by Matt Crossick