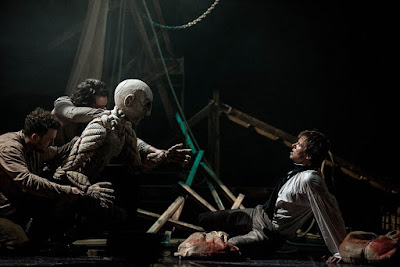 There are more than just the usual chills in Blackeyed Theatre's Frankenstein. And it wasn't due to the lack of any perceptible heating at Greenwich Theatre last week during a particularly bitter cold snap.

Mary Shelley's tale is given a theatrical flourish in this adaptation by John Ginman. Percussion instruments underscore the tension and the monster is depicted by a giant puppet. He isn't particularly hideous and that makes you even more sympathetic towards him. 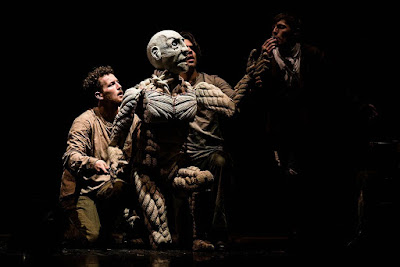 Perhaps that is the intention. Designed and built by Yvonne Stone (of Warhorse and His Dark Materials fame) and worked on by three actors, it is an impressive thing. It breathes. It leaps about the stage. It stares. It looks abandoned and unloved.  And when he starts to kill as revenge for his treatment even if you're familiar with the story, it still manages to surprise and shock.

The piece takes a little time to get going, but once it does it is worth the wait. With music, tension  and the giant puppet it becomes quite a spectacle.

It opens with Frankenstein (Ben Warwick) in pursuit of the beast near the North Pole and Frankenstein telling his tale to Captain Walton. Here he is pretty unsympathetic. He is a man obsessed with the meaning of life while letting life (and others) pass him by. 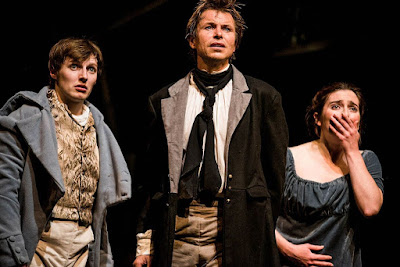 Max Gallagher as Henry and Lara Cowin as Elizabeth give the piece its human element and its heart.

The rest of the cast fill out supporting characters and provide the evocative musical accompaniment.

Directed Eliot Giuralarocca, it has concluded its run at the chilly Greenwich Theatre.  But is continuing its tour around the country until 22 March. Catch the beast if you can. Check their website for dates.