Flashers, savages and gluttony: You're Human Like the Rest of Them @finborough 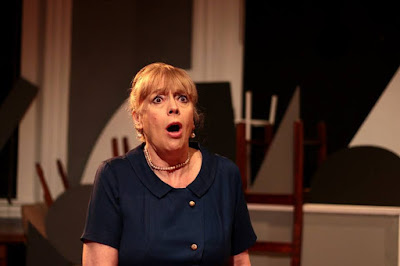 It's a bizarre, odd sort of world. Nothing makes sense. Gluttony, communism, flashers in cemeteries. It's all laid bare in You're Human Like The Rest of Them. Three short works by B.S. Johnson playing at the Finborough Theatre. The three pieces include two world stage premieres of pieces originally broadcast on television and radio and the first production in over forty years.

B.S Johnson was a radical and an experimentalist.  He wrote plays, poems and novels. A collection of his films are also available. His pieces are about the big themes of life, death, religion. Nothing is quite like it seems. In 1973 a month after completing a short filmed piece called Fat Man on a Beach (well he probably was a little overweight but that title seemed an exaggeration), he committed suicide.  Since then his work has developed a bit of a cult following. Given the theatricality and originality of his works it is surprising that there has never been a staged performance of them. Until now. 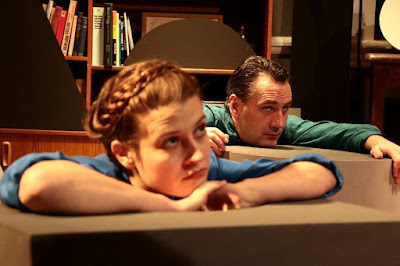 Down Red Lane is a debate between diner (Reginald Edwards) and his belly (Alex Griffin-Griffiths). It's a standoff between gluttony and the bodies major organs delivered with style and panache.

The final scene, You're Human Like The Rest of Them a teacher (again Taylor-Smith) learns that the spine is pretty useless and that death is inevitable. But despite realising that we're all just decaying he keeps calm and carries on.

It's all a bit bonkers, rude and confronting.  But the series of intense scenes and lively performances hits the mark for laughs.

Directed by Carla Kingham, You're Human Like The Rest of Them runs Sundays, Mondays and Tuesdays at the Finborough Theatre until 21 March. 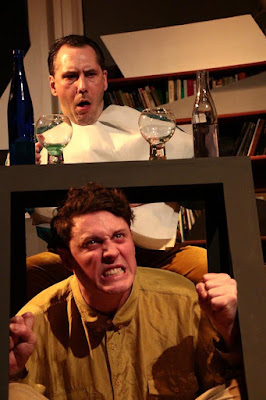