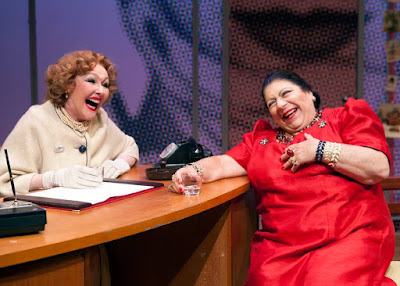 Madame Rubinstein at Park Theatre should be a camp romp covering the rivalry between Helena Rubinstein, Elizabeth Arden and Revlon. But instead it is a dragged out affair that has few laughs and some  unintended ones.

The jokes are so stale you could think that John Misto wrote it in the 1950s rather than the present day.

Miriam Margolyes as Rubinstein looks the part and has fun with the role. But in the end she can't do much with a lumbering script and odd looking production. Frances Barber as Arden is terrific as her foil, but she doesn't get much to do other than look fabulous in fur. 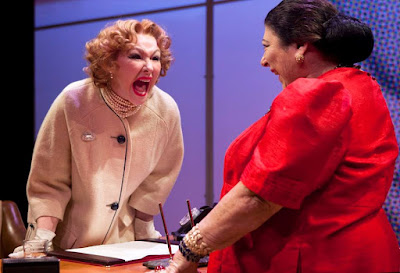 Helena Rubinstein and Elizabeth Arden were self-made social climbers. They invented the cosmetics industry we take for granted today. They introduced the ideas of "problem skin", advertising and pseudo-science. Their rivalry, either real or imagined, should have been fertile ground for exploring women in business. But you get no sense of who they were, their successes, the products they sold or the era in which they lived in.

Jonathan Forbes as Rubinstein's assistant Patrick O'Higgins, is reduced to being a drunk Irishman who has sex in toilets. When he isn't doing either of those things he recites biographical facts of Rubinstein's life. Perhaps this is for the benefit of audience members who didn't buy a programme or check Wikipedia. Surprisingly based on the character presented here, he would later write a book about his time with her. But at least you get the chance to see his buttocks.

The other performer in the show has to be the office desk that moves across the stage more than anything else. One moment it is on the right. Then blackness and two ladies appear from backstage and have to drag it to the left. This goes on. And on. And on. There is also a reminder of the era with a projection of the year that crawls  across the back of the stage. Time goes by so slowly.

Madame Rubinstein is at Park Theatre until 27 May.