Keeping up appearances: The House of Bernarda Alba @SpanishTheatreC 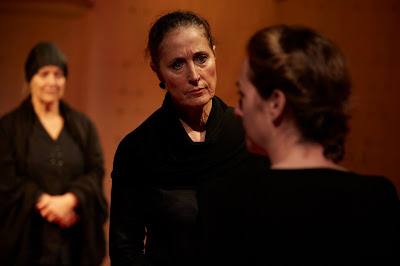 You’re never in doubt with this production of The House of Bernarda Alba that the heat and the attitudes are oppressive in this small Spanish town.

A thin veneer of respectability and status barely conceals the urges and desires lurking beneath. And women, as second class citizens have only gossip, traditions and the church to cling to.

This passionate, topical and emotional production is currently playing at the Cervantes Theatre near Southwark, in both English and Spanish.

Federico Garcia Lorca’s final play is economical and crafted that so that much information is quickly conveyed. But even though its set in a small Spanish village in 1930s Spain, there's a modern feel to it.

The head of the family may have just died, but as one of the maids prepares for the return of the family from church she spits on his picture. She’s glad he’s dead as he won’t be lifting her skirts anymore. 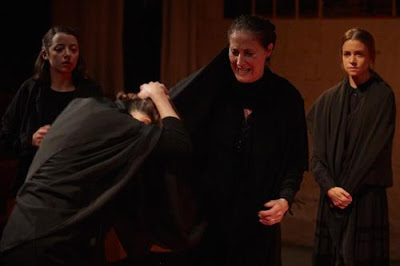 When Bernarda (Mary Conlon) enters with her daughters, she is full of rage and determination to uphold traditions of a long period of mourning.  Besides, none of the local villagers and farmers are good enough for Bernarda’s daughters. Nor have they received enough inheritance to make them an attractive proposition.  And so they remained shut away. Imprisoned in the family home.

As Bernarda, Conlon delivers a powerful and dark performance of a woman determined to keep up appearances and traditions. She’s frightening. But she’s also blind to the quiet rebellion her daughters are starting. There’s a  coloured fan, a green dress, the wrong kind of lace.

Bernada was also married before. Her eldest daughter from this first marriage, Angustias (Joanna Kate Rodgers), has an inheritance. She becomes engaged to local man Pepe. This sets the scene for jealousy and rivalry among the daughters, leading to an explosive climax.

A terrific cast has been assembled here, particularly Maite Jáuregui as the youngest and wildest daughter Adela. She won't accept it isn't her turn, nor is she prepared to wait. 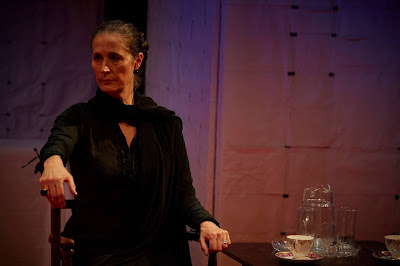 Sound effects enhance this simple production. Bells, singing and noises heighten the tension and claustrophobia from being shut away from the outside world.

Even if you’re familiar with the story, this production is brisk and naturalistic right up to the end that it still feels shocking.

Directed by Jorge de Juan, The House of Bernarda Alba is at The Cervantes Theatre until 9 December. The theatre is also one of the best fringe theatre venues for both sight lines and comfort. Don't miss it. Performances are in Spanish (with some of the English cast also performing) Monday to Wednesday and in English Thursday to Saturday.