Victims of circumstance: Mother Courage And Her Children @swkplay 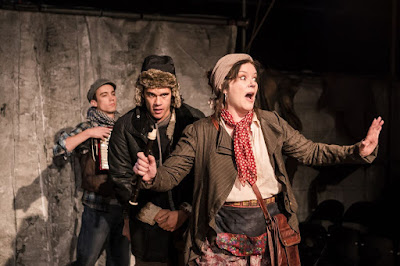 War is hell. War is a bitch. But everyone has to scrape by and make a living. Tony Kushner's translation of Mother Courage And Her Children was given an epic staging at the National Theatre in 2009. Here in the more intimate surroundings of Southwark Playhouse, there's less spectacle. But it's still worth a look. Particularly if you're sitting on the right side of the traverse.

Brecht's piece should make you feel uncomfortable with sharp observations about capitalism, war and religion. This production just makes you feel uncomfortable. If you're sitting on the wrong side you will have to make do with either stretching your neck or imaging what's going on behind you.
Mother Courage as portrayed by Josie Lawrence seems more a victim of circumstance here. She comes across as likeable and bit funny. It is a fascinating choice to play this antihero. You begin thinking, "Well, she has to carve out a living. So what better way to do that then to travel across Europe during the Thirty Years' War selling goods to soldiers, with her children in tow?" 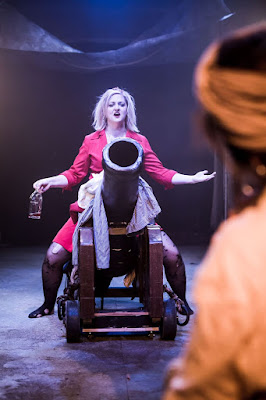 But this production feels more like a period piece than a critique of capitalism and war. With its awkward traverse staging things tend to just move on one end and off the other, making for long entrances and exits.

Duke Special's music works well sung by the cast, but without amplification at times feels underpowered.

Tony Kushner's angry translation first arrived during the years after the war in Iraq, which was an obvious analogy. Perhaps the timing isn't right for Mother Courage's wagon to return. For now.

Directed by Hannah Chissick, Mother Courage And Her Children is at the Southwark Playhouse until 9 December. 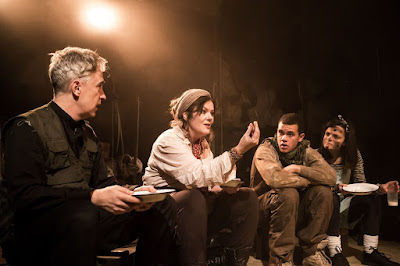