While theatre is slowly showing signs of reopening in the coming month I’ve seen my first show indoors. In Italy. A concert. No temperature checks just leave your name and wear a mask throughout the concert. And sit relatively apart from strangers within a small church where the concert was taking place. It was great to see something. Anything. After so many months.

The transmission rates are lower in Italy, and they do appear to be taking Covid19 a lot more seriously than in the UK. Leaving your name and phone number is a requirement. Posters are everywhere reminding people to wash their hands and keep a distance. Indoor spaces are well ventilated. Everyone wears a mask without making a fuss. Hopefully following these simple rules without over-complicating things will allow venues to open up where possible.

Until then, The Public Campaign for the Arts has launched a new online platform, creating an unprecedented support link between UK citizens and their cultural organisations.

The Arts Map, enables anyone to find and support arts companies near them. It was funded entirely by small donations from over a thousand members of the public.

And here are some other theatres looking for support:

The Actors Centre - Just off Cambridge Circus is a small space for works in progress. The theatre has announced by the end of the year it will run out of money and so has set up a donation page. 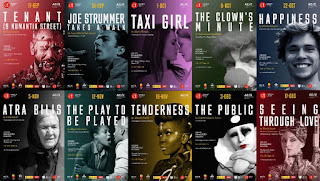 The Cervantes Theatre in Southwark is continuing in its mission to showcase the best Spanish and Latin American plays in London. They have launched a new online season for the autumn while continuing to welcome support for the theatre.

The Gate Theatre in Notting Hill is currently closed, but back in March, the theatre invited nine pairs of performers to write letters to each other.  Some met for the first time performing in a previous production at The Gate, Dear Elizabeth, and some are strangers.  The show, Letters, is about this correspondence. With different performers and content, each can be viewed by Zoom and details about the performances are on their website, along with details about how you can support the theatre.