Come inside and take a seat: Unfamiliar at home

Continuing the online theatrical experiences is Unfamiliar at Home. Streamed online using the all-too-familiar office video conferencing facilities of Zoom, it brings to life the trials of domestic life, being queer and the desire for a family. It's part performance, mixed media and office meeting. But it captures the ordinary and extraordinary lives of creative people living in improvised and unexpected domestic arrangements.

The piece introduces us to Victor and Yorgos. They want to have children. Or at least that's what they think. But past run-ins with parents, the economic uncertainty of being artists and the struggle of finding a surrogate are barriers. And there's plenty of unsolicited advice about what makes a family and how to become queer parents. I was surprised none of the advice was about making childproof their home, but maybe nobody had seen their overstuffed bookcases until now. 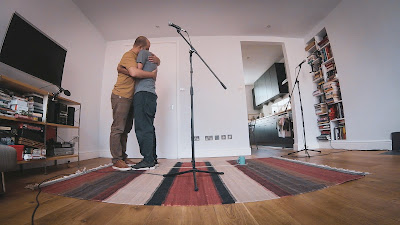 The story is autobiographical and at times intimate as it goes into the detail about their lives and the challenges of being artists during a pandemic that has hit freelancers hard. And for many of us, the scenes of shared confined spaces during lockdown feel all too familiar.

Given Google's YouTube seems to be the preferred platform for streaming shows due to its size. But the service is a mess with a layout designed to serve non-stop clickbait and throw you down any number of rabbit holes of disinformation. But watching theatre by Zoom can also be unnerving. It's hard to escape into a world of storytelling sitting in the same kitchen spot watching a performance that you also spend the day working.

Created and performed by Victor Essex and Yorgos Petrou, Unfamiliar At Home has completed its online meetings for now but check their website for updates. 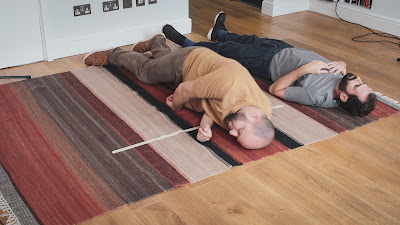