The story of the Sorcerer's Apprentice is updated to modern tastes in this funny and engaging new family musical. Here a father and his rebellious daughter discover their magic and save their town from a bunch of brooms while making a few observations about parenting, science and the environment.

Filmed at the Southwark Playhouse in February, it's also a reminder about what we're still missing from live theatre. While it's great to see a new show streamed online, you also have to let your imagination remind you where there would be applause and laughter from this energetic and thoughtful production. Hopefully, we will get the chance to see this show live someday.

Written by Richard Hough and Ben Morales Frost, the story takes place in a small northern town called Midgard. It's on the brink of environmental destruction due to the endless search for prosperity. Eva, played by Mary Moore (making her professional stage/streaming debut), is a school dropout. But she discovers her talent for magic and activism. Meanwhile, her father (David Thaxton), a widow, struggles to warn the town and deal with such a woke yet unskilled daughter. 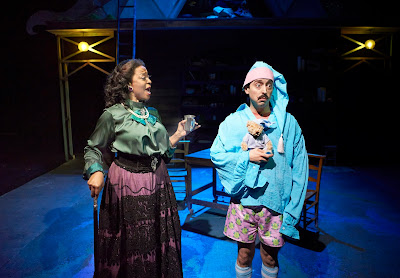 While there are enough plots and subplots that could fill several musicals, it's cleverly put together and the songs are catchy and the production is full of imagination. However, as a family musical, watching it with youngsters be prepared for many questions about environmental impacts,  different types of families and northerners.

And you can't be too down on the refinery's slightly villainous owner (Marc Pickering). When told off by his mother while wearing a pair of outrageous pyjamas and hugging a teddy bear, he is a sight.

Directed by Charlotte Westenra, The Sorcerer's Apprentice is streaming now on Stream Theatre until Sunday, 14 March for a total of 22 streaming shows. Hopefully there will be a soundtrack recording of the show available soon as well. It runs for about 2 hours, including a short break.