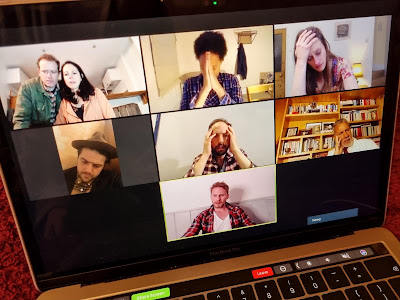 Waiting for Lefty, Clifford Odets depression-era agitprop theatre piece gets transformed for the covid-era in this fascinating production that gives you a chance to both enjoy the work and immerse yourself in a post-show discussion about what you've just seen. It's an excellent concept for theatre streams and recreates interval moments of passing conversations (albeit curated with knowledgeable experts). By the end, you feel you appreciate the piece its context.

Streamed through Zoom, there's a thirties-era look and feel to the piece. Yet as the drama unfolds, it is within modern homes. The anachronistic treatment suits the material well. It calls for minimal staging, and so having actors perform within their own homes takes this to a new level.

The piece starts with a group of cab drivers (and the audience) at a union meeting. The drivers are debating whether to strike for a living wage. And they're waiting for Lefty, their elected chairman, to give them an idea about what to do. Alongside this is a series of scenes where the harsh realities of capitalism are laid bare with stark choices for the characters. As part of the audience, it feels like your either a voyeur or part of the proceedings. It all depends on what takes your mood.

In the pandemic-induced recession with people out of work and struggling to make a living, it's not too much of a stretch to see parallels to life today. While living standards have improved, the rise of the gig economy where everyone is a contractor, and the false allure of being your boss, conceals the slow erosion of fair wages and free time as the time taken to earn a living takes longer further to do. And with the insatiable demand for home deliveries of everything from groceries to a hot meal via a smartphone, a work-life balance seems elusive for those who aren't in a job that allows them to work from home.

Food for thought and a call for action, Waiting For Lefty is streaming until 23 May. Directed by Phil Cheadle, it runs for an hour with a short break and a post-show panel moderated by Jacquelyn Landgraf. Check the website for details.