It seems apt that the first live theatre to watch since the pandemic kicked off in 2020 was about two men not entirely sure about who they are after an awkward encounter. After all, adjusting to new routines of mask-wearing, restrictions, bubble seating. It all feels just as awkward and enthralling as two men hooking up in a London car park for the first time.

Charles Entsie’s No Strings Attached was to open the Kings Head Theatre in Spring 2020. But the delay has been worth it. Presented in an empty shop space in Islington Square, it feels more like you’re in a car park where the action takes place. And performing in an empty shop space is a reminder (whether intended or not), of the impact the year has had on retail and hospitality.

There are no names. There’s only a man (Razak Osman) and a boy (Shak Benjamin). Opening after the end of a brief encounter, the man tries to strike upon a conversation with the boy for reasons that aren’t entirely clear initially.  An awkward conversation begins full of bravado and half-truths. But as the piece advances, they slowly chip away at this, realising that they have more in common with each other than initially assumed.

It’s cleverly constructed and provides a fresh take on men being honest with who they are. There is memorable dialogue along the way (including one about British beaches being rubbish, which was on my mind the bank holiday weekend while I was at one). But the performances by the two leads give this its emotional weight. The pauses, the looks, and the rapport between the two provide an added intimacy.

Directed Aileen Gonsalves, No Strings Attached is at a pop-up space in Islington Square (just up from the Kings Head Theatre) until 19 June. You can also donate to the theatre direct from its website. 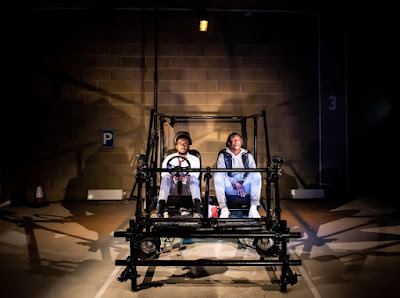