Usually, rock stars either die young or fade into obscurity as they become old and weathered. If they’re lucky, they will get tour with their greatest hits or get on some celebrity television show. But when it's a rock star by the name of Dorian, you know that he's going to be a baby-faced singer with a few skeletons in the attic. Or at least a portrait that's a bit suspect.

Oscar Wilde’s The Picture of Dorian Gray, serves as the inspiration for this story of an eternally young rock star who wants to discover love. The electro-pop soundtrack makes it more like a nineteen-nineties pop musical than a rock musical. But it's melodramatic enough to hold interest as this Dorian takes off with both song and his heart. Although I was hoping that fate would befall Dorian like other nineties stars once he destroys the painting. Such as morphing into resembling a cab driver and shouting about conspiracy theories. In this case, however it’s a faithful rendition of Wilde’s story.

The show initially began as a reading. It was due to open at The Other Palace in March 2020, just as the pandemic hit. Now that it's been filmed in a secret London location, we finally get the chance to see it online.

Written and directed by Linnie Reedman with music by Joe Evans and musical direction by Sophie Jugé, Dorian A Rock Musical is available to stream at Stream Theatre from this weekend. It will be available on-demand from 22 July through to 12 August. 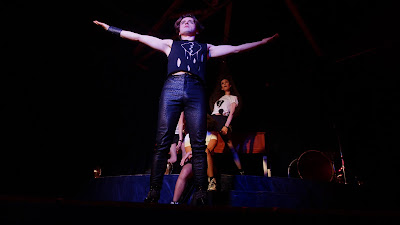