With time often comes perspective, but in Peter Gill's memory play Small Change, time is less kind. The march of time has left behind a hazy recollection of events, missed opportunities and cues. Nothing seems to be what it is or was. For the audience, if you're lost trying to follow what's happening or unfolding, it shouldn't matter. And not just because if you’re like me it has been a while since seeing something at the theatre in person. The characters are most likely lost too. Its currently playing at the Omnibus Theatre in Clapham.

The story takes place on the east side of Cardiff in both the 1950s and 1970s (time is a bit relative here). In the later period, Gerard (Andy Rush) is trying to find the moments in his life that made him who he is —growing up Catholic in the 1950s in Cardiff with his stern talking mother,  Mrs Harte (Sioned Jones). But his relationship with his neighbour and best friend Vincent (Toby Gordon) causes the most moments of reflection. From larking about as youngsters to forming a deeper bond. But events and circumstances get in the way. And as Vincent's mother (Tameka Mortimer) struggles to bring up a large family, things quickly come to a head. 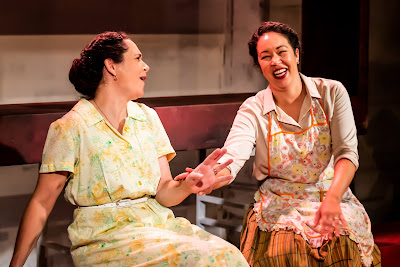 There is a simple staging to the piece with the four characters moving around large brown boxes to represent the time and place. Often full of symbolism, you have to listen intently to keep up with the what, where and when they could represent.

But this allows the performances to shine. And the realities of life in both periods come out in the mundane and trivial discussions between the characters. There is rich detail in the discussions between the mothers and their worries. And the same comes out in the boy's carefree spirit and unspoken desires. The four performers sensitively portray it all, but you may get as lost as the characters you're watching. But perseverance has its rewards.

Directed by George Richmond-Scott, Small Change is at the Omnibus Theatre until 2 October.