What happens when two childhood sweethearts escape from each other's orbit? Well, no prizes for guessing it doesn't end well, but James Lewis's Lately tries to piece together the fragments of two young lives from the roads taken and not taken. But it may not be everyone's cup of tea, and the theatre offers up resources for those troubled by how it ends. Still, it's a delicate exploration of conflicting stories, priorities and young people navigating a confusing and messy world.

Callum and Alison seemed like they would be together forever. They had a lot in common. Most of it was crap. They both have a crap family life and live in a crap part of England. The only things that aren't crap are the endless waves from the nearby sea, the occasional trip to the fairgrounds. And a few fireworks that go off when it's Alison's birthday. It's a monotonous and grim life. But while Alison wanted to escape, Callum remained firmly planted where he was. 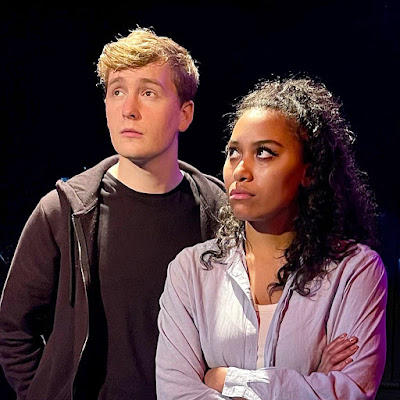 When Alison gets the chance to go to Thailand the two go separate ways. But freedom from home and from their demons proves to be illusory. And tragic for one of them.

It's a short piece lasting only an hour. Fragments of the story emerge to create a picture of loss and alienation. The performances by Matt Wake and Lauren Ferdinand highlight the isolation and loneliness in a crazy world.

Directed by David Brady, Lately returns to the Lion and Unicorn Theatre until 9 October after making its debut there in September. There is an additional performance at the Albany Theatre (with an alternate cast) on 29 October. The piece contains strong language, themes about crap towns, suicide, the pandemic and an oblique reference to North Korean rockets and Donald Trump.