Going to the theatre is just one of the things we can do to pass the time by as we slowly die, so here you can make an evening of it. Two short works by Samuel Beckett make a haunting and reflective double bill at the Jermyn Street Theatre and give you enough time to have dinner after.

Alone with your thoughts (and surrounded by mostly masked theatregoers), mortality, regrets and endless pondering may not be everyone’s idea of a night out at the theatre. But it’s certainly provocative.

Theatre doesn’t have to be three hours long to linger with you. The themes about age, the passing of time, and death seem apt after the last two years. The pieces stir up memories of those who have left us or who remained close to those that did. 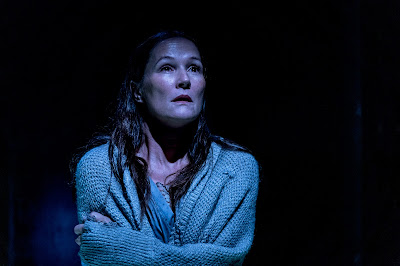 First up is Footfalls. A woman paces up and down a small stage. Her footsteps are audible at every step on the wooden platform, which is like a platform. There’s a bell that tolls too as she walks and reacts to her mother’s voice. Motherhood, religious isolation and loneliness are at hand. Her mother is old. Is she talking out of pity for her daughter or saying something darker? It’s ambiguous enough to work on many levels, and Charlotte Emerson is a mysteriously haunting figure as the timid lady in the piece. 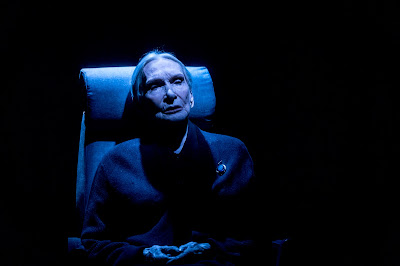 The second piece, Rockaby, is about an old lady at the end of her life. Sitting in a rocking chair, she speaks her thoughts about her life, age, and alone. And her chair rocks. Siân Phillips sits in her chair, staring out blankly (or perhaps asleep) as her voice over contemplates the end.

In the dark space of the Jermyn Street Theatre, with only the performances and voiceovers  (and perhaps the sound of an alarm upstairs and somebody’s phone vibrating), it was an immersive experience.

Directed by Richard Beecham, Footfalls & Rockaby is at Jermyn Street Theatre until 20 November before a short run at Bath. Worth a look.