Will you still love me tomorrow: The Woods @swkplay 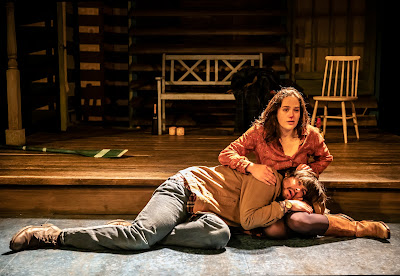 In The Woods, conversations drift into seemingly random discussions about seagulls, raccoons, or aliens. Perhaps it's due to the isolation from being set in a remote cabin. But it's also a heterosexual play, so that means there's a man, woman and inevitable conflict. But even if there aren't any surprises in this revival of David Mamet's 1977 work, the performances and the staging keep you focussed on it like you're a voyeur in the proceedings. It's currently playing at the Southwark Playhouse.

The Woods is set entirely at a secluded cabin on the porch of a summer house. It's early September, and Nick seems to have been keen on taking things to the next level with Ruth. Ruth seems keen too since she took the trouble to buy a gift for Nick. But slowly, from Dusk through the night, things begin to unravel. Things that are banal and trivial become blown out of proportion. Sex becomes complicated, and ultimately there's an outburst that takes everything past a point of no return. 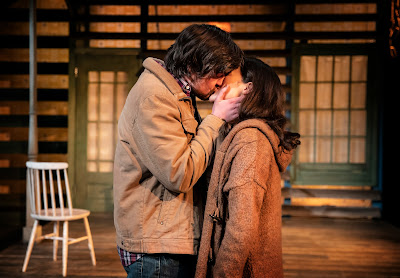 The rambling discussions can be frustrating at times. But set during a time without mobile phones, social media or even a television, it's entirely plausible that this is all people did talk about in circa 1977. And among the idle chatter, the recurring themes of the passing of time, distrust and the call of death emerge.

So in this piece, how it is said is more important than what is said. And as the sparing couple Ruth and Nick, Francesca Carpanini and Sam Frenchum hold interest throughout. Carpanini is making her UK theatre debut, and it is an inspired pairing. You feel the tension and uncertainties from the outset.

There are a few laughs along the way. But it's more a piece to think out loud about rather than laugh out loud. And if you're looking for date night play, it just might be the piece to have a thought-provoking discussion about the future of your relationship over a post-show dinner. After all, it's a 90-minute show.

Directed by Russell Bolam, The Woods by David Mamet runs at the Southwark Playhouse until 26 March. 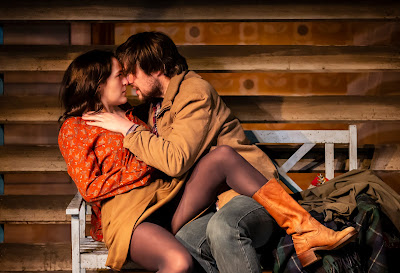