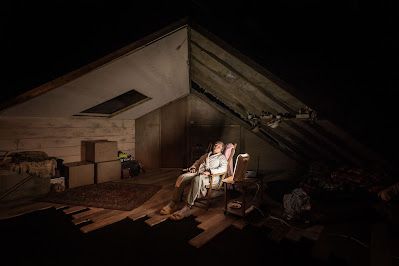 I get home from seeing SAD at the Omnibus Theatre on the weekend, and a friend is over. "What did you see?" She asked. "Well, I saw a play about a woman who locked herself away in an attic after accidentally killing her mother over Christmas with an overcooked turkey. Meanwhile, the neighbour comes through the skylight for unsatisfying booty calls, and her husband brings up ham sandwiches." I guess sometimes you really can make things up. Victoria Willing's new work weaves together four characters searching for life and meaning as they realise life has passed them by so far despite a series of challenging events.

It's challenging to work out is a black comedy or just a very depressing story about life in London in January. That's the time of the year when the days are short, the parties are over, and the only thing to keep people motivated is some pointless New Years' resolution. But if you have a warped sense of humour, you'll probably enjoy the bleak outlook. 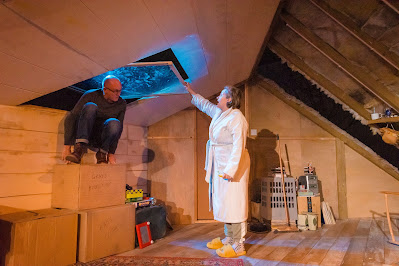 We meet Gloria (Debra Baker) in her attic, entering the theatre. She's with her music and a lightbox to help with seasonal affective disorder. Her husband, Graham (Kevin N Golding), then appears with a ham sandwich. But what she craves is a banana. She has one in her pocket, but soon, her neighbour Daniel (Lucas Hare) pops through the skylight to give her another. A best friend, Magda (Izsabella Urbanowicz), is thinking of giving up her job as a teaching assistant and returning to her home country, Slovakia, as a more lucrative job for her is there.

Everyone has spent their life so far pursuing an unfulfilled dream. And so now they are lashing out in unexpected ways. And when you have spent your life protesting or raging or trying to be unconventional, sometimes the solutions to life's problems can be rather conventional.

A series of slightly unconvincing coincidences brings the four characters together and in conflict. However, the cast manages to bring to life a moment in time where four people seem stuck about their choices in life and unable to make the next move to escape. Or come down from the attic.

I'm not sure I sold the play to my friend, but it certainly left me plenty to talk about to her. And as neither of us like turkey or ghastly Christmas dinners, we could sympathise with Gloria... Just a little... Surely that's more than enough for the theatre?

Directed by Marie McCarthy, SAD is playing at the Omnibus Theatre in Clapham until 30 April. 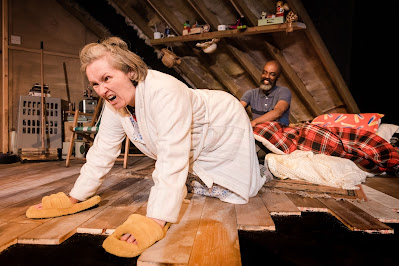