The Paradis Files takes you back to the salons of 18 century Vienna. Albeit briefly There, Maria Theresia von Paradis is a star composer and pianist. World-famous in Europe, a pupil of the composer Salieri and possible lover of Mozart, if one believes the gossip. And there was one other thing about her. She lost her eyesight at a young age.

This new chamber opera by Errollyn Wallen uses opera to convey the story of Paradis, both her triumphs and humiliations. She was an object of desire and experimentation. This short piece sets out clearly that she had a colourful life. Being the daughter of Joseph Anton von Paradis, Imperial Secretary of Commerce and Court Councillor to Empress Maria Theresa, undoubtedly helped. But as the family sought to remedy her blindness, she was subject to various “cures” by quack doctors. 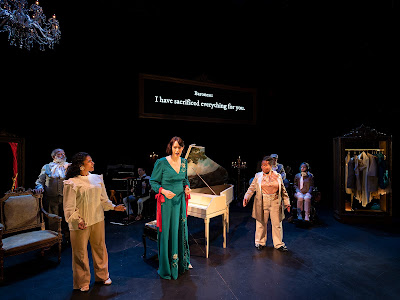 Wallen doesn't confine the musical style to any particular period. There are elements of classical music mixed with jazz and percussion. And as a chamber opera, there isn't much time to dwell on the plot or story. It's all about feelings.

Through flashbacks and the use of a chorus as "gossips" of the court, they convey the thinking of her contemporaries as she takes many lovers and gives birth to a stillborn child. The piece eventually settles on the relationship with her mother and the role she played (or didn't play) while her life was subject to various experiments.

As Theresia, Bethan Langford, also visually impaired, presents her as a determined and dignified character who manages to live life on her terms. Her vocals give the character warmth. There's a beautiful duet with Omar Ebrahim as her father, Baron von Paradis, who up to this point in the piece seemed to be indifferent about her life. There’s also a wonderfully creepy performance by  Ben Thapa as her mentor Salieri, as he asks her to hold him while she plays.

The piece was commissioned by The Stables for IF: Milton Keynes International Festival and is a Graeae Theatre Company production in partnership with BBC Concert Orchestra and Curve Theatre. If only there were more time to explore her life. But perhaps that’s for another work.

Directed by Graeae Artistic Director Jenny Sealey with musical direction by Andrea Brown, The Paradis Files is now touring through to 12 May after concluding a run at London's South Bank centre. Check their website for tour dates. The performance includes signing and captioning. There are various explanations and descriptions ahead of the performance starting as well. 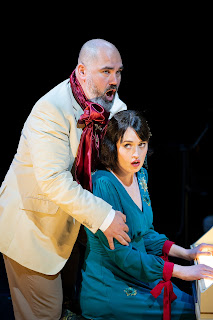