Watching Pulman sing a series of classic and perhaps overlooked songs of the past feels like we’re all picking up where we left off. The songs she sings are part of a timeless series of classic standards by the likes of Irving Berlin and Fats Waller. Songs about love, loss and revelation all fit into the category of easy listening, and with her sublime vocals, they are easy on the ear. And they may not be songs for the young, but they are songs for the young at heart.

Liza Pulman comes from a show business family. Her father was screenwriter Jack Pulman, and her mother was an actress. Growing up, she sang in a close harmony duo with her sister. She would then train as an opera singer at Guildhall School of Music and Drama. But as she admits during the show, it’s musical theatre and the writers who make up the the great American songbook that are her real passion. And that includes Streisand and Neil Diamond. 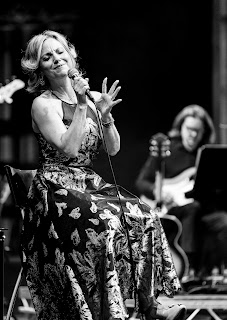 It’s hard not to like a show that opens with Neil Diamond. Even if his name evokes the 1970s and curious choices of open shirts on album covers, his songs have a timeless quality to them with their ambiguous lyrics that can mean all things to all people. She also throws in many of the more thoughtful and reflective songs sung by Barbra Streisand throughout her career. And during some of the quieter moments, if you close your eyes listening to Pulman, you could be forgiven for thinking you’re listening to Barbra Streisand. Although the thought of Streisand in Hammersmith seems like a quaint idea, Pulman’s vocals, particularly at her lower register, seem so similar. But then her operatic training comes through, which has given her a voice of clarity and longevity. And this makes her sound unique and special.

Accompanying her is a six-piece band in the smaller studio space at Riverside Studios was a feat of audio engineering to keep everything in balance. It worked well, but I feel the show will work better in larger venues. Or at least venues with cabaret seating that would make it feel more of an intimate event.

There’s an album to go with the show, which captures some of the moods of the live show. But the real thing is worth catching if it comes your way. With musical direction by Joseph Atkins, Liza Pulman, The Heart of It is at Hammersmith Studios until 30 April. It will be back at Wiltons Music Hall in July. Check her website for more details.