Joel Tan's play, Of No Particular Order, currently playing at Theatre 503, is an unusual piece of theatre. For 90 minutes and a series of scenes over 300 years, it attempts to piece together the order (or disorder) of an unmentioned society. Individual scenes do not add too much. But together, they explore the many facets of what losing freedom, or not having it in the first place, means for everyday people.

Tan's approach may not be for all tastes. The audience must do the work to put it together and make sense of it. However, it is a rewarding effort to make sense of what can sometimes seem like a series of random events and interactions.

A cast of four - Daniel York Loh, Pandora Colin, Jules Chan and Pía Laborde-Noguez - resourcefully play the various characters that exist over the 300-year timeframe. Characters come together either to help or to screw each other over. 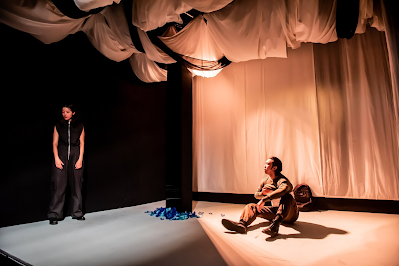 It opens with two contractors hired by a park worker to remove some birds from a tree. But it then becomes clear this is to clear the birds away by any means necessary to allow for a military parade for the glorious leader. And there isn't time to do this humanely.

And it isn't just a few birds that meet an untimely end. More violent scenes continue as groups of people resist the regime. But what's equally intriguing is as society moves past the conflict, there's new self-censorship where taboos remain. These new taboos come to light in a scene where a teacher at a school prevents a poem that depicts controversial moments and ridicules leaders.

Designer Ingrid Hu has wrapped the small theatre space with black and white cloth and lighting effects. The effect is either calming the nerves as if you're in a bed or making you feel claustrophobic. You can take your pick.

Directed by Josh Roche, Of No Particular Order is having its final week at Theatre 503, ending on Saturday 18 June.