From Here To Eternity lands at the Charing Cross Theatre with all the energy and enthusiasm of a surprise attack on the layabout and jaded audiences of the West End. Afterall, audiences at the West End seem a bit soft these days. This revival focuses on the leading characters in the story, making the two weeks leading up to the bombing of Pearl Harbour a musical theatre event that doesn’t let up… much.

Adapted from the novel by James Jones, the musical has lyrics by Tim Rice, music by Stuart Brayson, and a book by Donald Rice and Bill Oakes. It is a pared-back version of the show that was on in the West End nearly ten years ago. But this also helps distil the drama down to the bare essentials. And the smaller space of the Charing Cross Theatre gives the piece intensity, focus and a sense or urgency.

Centred around an army unit stationed in Hawaii two weeks before the bombing of Pearl Harbour. There's talk of war but no action except for the fighting among the men. There's so much scheming going on there is little time for thinking about the imminent threats. Or being combat-ready. Unless combat included backstabbing, boxing and blow jobs. 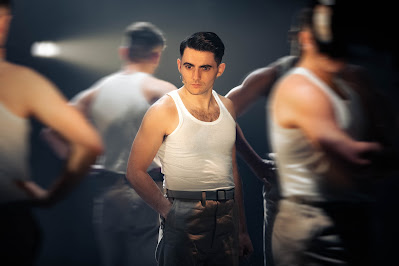 Captain Holmes (Alan Turkington) wants to win a boxing championship to get promoted. And so his second in command, Warden (Adam Rhys-Charles), gets an old friend he knew as a great boxer to transfer. The only problem is that this guy,  private Prewitt (Jonathon Bentley), has given up boxing after blinding a guy in a match. Meanwhile, Holmes has a beautiful wife, Karen, who is having an affair with Warden. And Prewitt is obsessed with a girl he met at the local brothel, so he turns tricks with gay men to afford to pay to have her all night.

With all this melodrama, it is easy to see why it's an appealing story to turn into a musical. And the cast embraces it well, including Jonny Amies as the clowning around and enterprising Maggio.

While there aren't many women in the piece, Carley Stenson makes up for it with her velvety alto voice and commanding presence among the young men. And Desmonda Cathabel, as Lorene, has a significant number about choices in life. 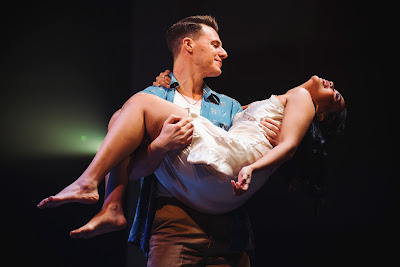 All the leads get a song to sing. The only trouble is that every song is a soliloquy. Given how fast-paced the drama is, it becomes a little jarring when things come to an abrupt halt for a song.

This parred back production was first seen in North America. Suppose you let it wash over you like crashing waves on the beach. In that case, you will probably overlook questions such as how Prewitt became infatuated with Lorene. Or why did only Karen get a sexually transmitted disease, given everyone else seemed to be screwing around?

These are really minor quibbles to what is otherwise a blast of musical theatre. Directed by Brett Smock, From Here to Eternity is at the Charing Cross Theatre until 17 December. The show comes with warnings of flashing lights, references to suicide and language that passes for acceptable in parliament.