Santa’s coming for us: The Grotto @draytonarmsSW5 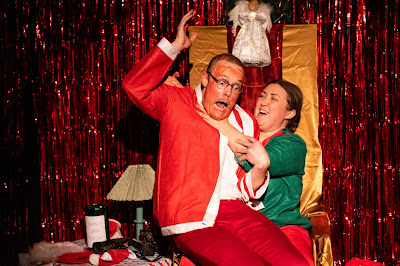 The Grotto is an alternative Christmas show for those who feel there isn’t enough blood, gore, and science fiction in traditional Christmas outings. Or you can’t stomach the usual good cheer this time of year. It plays at the Drayton Arms Theatre to satiate those who want to wish less good tidings to people at this time of year.

It opens at a Santas Grotto in some shopping centre.  Layla and Pete are in some Christmas purgatory—dressed as an elf and Santa, Welcoming in children and taking a photo of them on Santa’s lap. They are on a repeat loop all day to the tune of I wish it could be Christmas every day. The music speeds up as the day continues in a frenzy of desperate Christmas cheer. It’s as if the music starts sounding like, “I wish shit could be Christmas”. 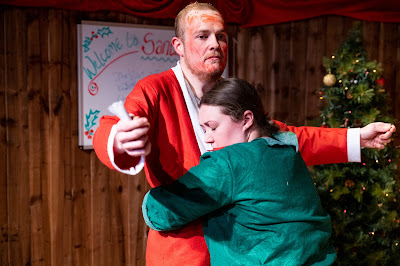 After finishing up for the day in this Christmassy purgatory, Leyla and Pete are visited by a ghostly presence as they have lost their Christmas spirit. Christmas is an endurance event for them of annoying family members and overcooked meat. They were once a couple, but now they have settled down to be friends as they scrape by to earn a living doing temp jobs.  But this is no A Christmas Carol. The ghost has plans for them as the former couple fess up to past mistakes. It becomes a battle to save their souls and escape this Christmassy hell.

Writer Toby Hampton also plays Pete. He’s a man-child with a heart of bronze. Laurel Marks is the more practical Leyla. They make an amusing couple with some fine comic timing as they open up to each other while opening up bodies and fighting demons.

It won’t be for all tastes, and the show could have been more fun if the ghost was a more animated Christmas ornament (a puppet or even a pantomime dame, dare one say). But for a show with its very own body cavity search, it’s a bloody alternative Christmas fare.

Written by Toby Hampton and directed by Matthew Parker, The Grotto plays at The Drayton Arms Theatre until 30 December. Merry Christmas! 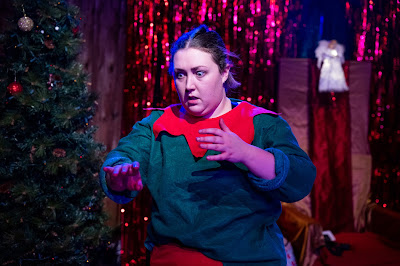