Salt-Water Moon, currently playing at the Finborough Theatre, is like watching a feel-good romantic comedy. Albeit one set in Newfoundland in 1926. You may know where the piece is heading. After all, it is part of a series of plays with the same characters by playwright David French. But it’s the journey of getting there that matters. There’s a tenderness to the story brought to life by two charismatic performances that will have you on the edge of your seat, wondering what will happen next. And not just because of the necessity to sit five abreast on the Finborough’s bench seats.

It’s a clear night in Coley’s Point, Newfoundland, a quiet and remote fishing village, in 1926. Mary Snow is stargazing, waiting for her fiancé to return. However, she is interrupted by the unexpected return of Jacob Mercer. He had left her to go to Toronto a year earlier without even a goodbye, and he seemed determined to win her back. 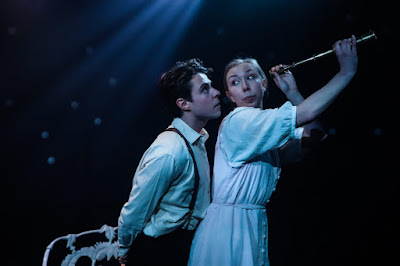 What then unfolds from small talk and idle chatter about the stars is a battle of wills against a backdrop of an isolated town that still is feeling the effects of its participation in the First World War. The economic effects of the war have forced Mary to seek an engagement to give her financial security. Jacob probably left to seek his fortune in Toronto.

But here we find them back together for one night only. There is an urgency in this piece underscored by circumstance, the imminent return of Mary’s suitor and the performances. Joseph Potter is a charismatic and endearing  Jacob with his alternating charm, serenading and scrappy manner. Bryony Miller is a poised Mary. But believable in her economic position and ability to offer the 1920s equivalent of a  devastating put-down.

Mim Houghton’s simple production of lightbulbs, a bench and mulch, with Neill Brinkworth’s lighting, is evocative of the summer house in Coley’s Point. You feel like you are in the garden with the pair rather than upstairs from a closed pub on a busy London road.

As a piece that captures a time and place and a spirit of troubled young love, it’s an entertaining opener for the new year.

Directed by Peter Kavanagh, Salt-Water Moon is having its UK premiere at the Finborough Theatre and is playing now until 28 January. 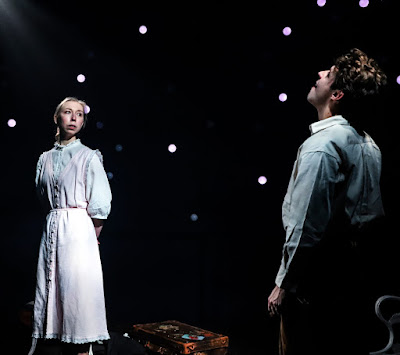