After all the excitement of the weekend where one was part of the London Gay Men's Chorus performing their summer concert at Cadogan Hall, it was nice to unwind with a quiet movie at the Odeon Leicester Square Sunday evening. Well not quite quiet... It was Mamma Mia! And a special Gaydarnation preview for Pride weekend so a lot of the audience was gay, drunk, coming down whatever they took from last night, or all of the above.

All the stops were pulled out for tonight's preview, including organ player as pre-show entertainment, free lollipops and a souvenir brochure which made the exorbitant admission price for this exclusive preview week worth it (which was almost the cost of a theatre ticket - albeit not one to see Mamma Mia in the West End). The Odeon is still decked out in the cladding from Friday's premiere (above) as well so that was a nice touch too... 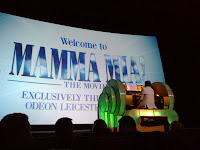 I have yet to see the stage musical after being put off by the awful cast recording of the show which I can only assume drained the show of its energy and exuberance, but I was not alone as most of the audience tonight had not seen it. So I got Mark who has seen it quite a few times to come along to see how much it was like the show. Well it turns out it is pretty much like the show and still rather fabulous, if just a little bit silly. Given the encouragement we were given to shout out and dance in the aisles that is probably not such a bad thing. There may not have been dancing in the aisles but there was dancing and grooving in the rows... I suspect given the state of the audience anything more vigorous was out of the question...

Meryl Streep, Christine Baranski and Julie Walters were all great and kept the laughs coming. Many of the musical numbers were also quite well put together... As for the plot, well while it has elements of farce about it, it also reminded me of the Southpark episode Cartman's Mom is Still A Dirty Slut which lasted right up to the conclusion of the film when some person yelled out, "Never mind all that, who's the bloody dad?!!" Well I suspect by this point nobody really cares...

This is a great night out at the movies, assuming you don't mind ABBA music and silly stories and chick flicks for older chicks. If you can get a group of ten or so people together, have a few drinks beforehand, then hit the cinema, it will be a great night. Well... That was the mix that sure worked well tonight... The film opens from Friday.