Theatre preview: Trial of the Mariner 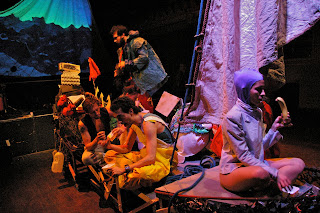 I caught a preview of The Trial of the Mariner at the Hoxton Hall this week. This is a work that is presented by the Lotos Collective and Hoxton Hall, and part of their Rebirth programme. It was not the full performance, but where they had got to so far in their work and it looks set to be an imaginative take on sustainability issues.

As it is an interactive multi-media piece about plastic, there are some creative uses for old margarine tubs, milk bottles, yogurt pots and the like. It was in the bar before the performance where you are greeted with this creation (that should be incorporated into the production in future). She was somewhat menacing yet also strangely alluring with large paper-mache breasts and milk bottle tops for nipples. The Lotos Collective have previously undertaken performances and site-specific projects in London, Naples, Ghana and Beirut and this piece continues along their ethos.

The story is set in year 2111, and a group of desperate sailors embark on a voyage to new land and arrive at a plastic continent, where things are not quite the paradise expected. It is inspired by Samuel Taylor Coleridge’s Rime of the Ancient Mariner and Lewis Carroll's The Hunting of the Snark (not too mention other sources such as Waterworld and 20,000 Leagues Under the Sea and explores themes around destruction of oceans, climate change, and the final resting place of all those plastic bags...

It is a performance that is an "immersive sensory experience". So be prepared to be pushed around and have a banana or two thrown at you. At one point I couldn't hold a wobble board as I had a drink and three bananas. I don't think I have found myself in that situation at a theatre before and I didn't want to eat the props before opening night. There is dance, circus arts, music and fabulous puppetry involving jellyfish-like creatures. The set is made from recycled materials and built by the local community and schools.

One of the best things about the piece is that you can focus on what you want as the story comes together, set to live music by The Junk Orchestra. Just be ready to duck from time to time when those long tubes of reused plastic come blowing towards you...

It opens on the 7 May. The Hoxton Hall is a great venue and close to a number of sensible bars and restaurants in the East End. It's good good value and worth catching.