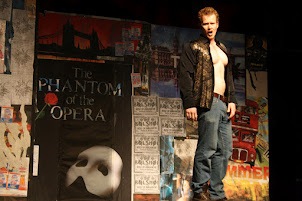 Heaven nightclub is an unlikely place for an opera at first. But Sunday night it was packed with people keen to take in a new twist to Mozart's Don Giovanni. The sexuality and genders of key roles are reversed with some surprising (and funny) results.

Heading the cast as the cad Don is Baritone Duncan Rock who has a voice to match his body... It's big. He has appeared at Glyndebourne, British Youth Opera, Opera Holland Park so he isn't just there to be pretty but he is central to making this show work so well.

With a book is by David Collier and lyrics by Ranjit Bolt this update has Don living as a yuppie in 1980s London where the sex, coke and boys are all one thing... Easy. There is also some inspired costumes including a very tight set of gold lame pants worn by one of the men. It's funny and amusing without too much dwelling on the gay gore for straight members or those curious about opera. There is also a lovely interpretation of hell and damnation for this modern Don.

Being at a nightclub the staging is somewhat unusual and inventive. The singers burst through the audience and perform on small stages throughout the club. It's best experienced when you move around with them and it took everyone a bit to get used to that at first. But it's also quite a marvel to see how the performers for the most part keep in time with the music, and for the conductor to keep things together... And unlike many of the pub operas that are doing the rounds these days, it is also a ten piece orchestra.

It is a pity that since the Royal Opera and ENO are always up for full frontal nudity (even when it isn't called for) that there wasn't even more flesh, but it is all good fun anyway. Besides, that's what the blogs are for I suppose...

Don Giovanni continues for a further four performances on 22, 23, 29 and 30 April. A return series is likely during Pride and to compliment the other shenanigans this summer and in future. Look out for offers on various sites as well.