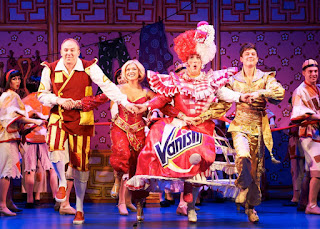 Some fun costumes, and a great performance by Tim Vine (pictured far left) as Wishy Washy keep Aladdin at the Richmond Theatre as a sensible evening out for families (or very big kids) who don't mind a mild case of panto over Christmas.

This version of the Aladdin follows a fairly traditional storyline. Aladdin works in his mothers laundry, meets a princess and after stumbling across the lamp with a genie, is granted riches that allows him to marry her. Well he would have married her if that evil Abanazar didn't get in the way. The loose plot is an opportunity to show off some great costumes, sing a few songs and tell a few gags. A few more filthier jokes for older members of the audience (timed to sail over the heads of the younger ones), and a few more modern tunes would have made the show better.

Of course for the younger members of the audience, who were likely to be experiencing their first time at the theatre this did not matter so much. They were hooked on the drama anyway... So much so that when Abanazar goes to steal back the magic lamp they were shouting out with such indignation.

Suzanne Shaw who has a dual purpose role of genie of the lamp and ring was a bit of a damp squib. It isn't really a star role and she doesn't have much to do. The other cast members don't fare much better with material that is pretty light on jokes and heavy on plot... During these scenes it was an opportunity for those in the audience with crayons to colour in their programmes, or for those in the audience without crayons to look on at the others who did with envy.

Nevertheless, even when the sound is a bit wobbly and the story getting a bit hoary, Tim Vine comes to the rescue with an assortment of bad jokes that sound good. The staging of the Abbot and Costello routine, "Who's on First" also comes across as fresh and funny as well. It runs through to 13 January.