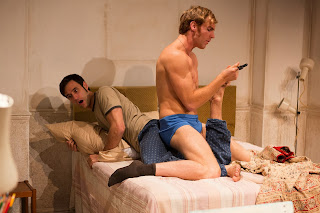 Passing By, a rare revival of an early Martin Sherman play is an opportunity to return to the carefree days of the early 1970s New York. This is a time where being gay could get you arrested and the only disease to fear catching was either hepatitis or gonorrhea. It is a comedy of sorts, but what was groundbreaking at the time was its frank portrayal of a couple who just happened to be gay rather than a play where being gay was the whole point of the play. It is a pity that some of this context is lost in this revival at the Tristan Bates Theatre which may leave you wondering what was the show all about. 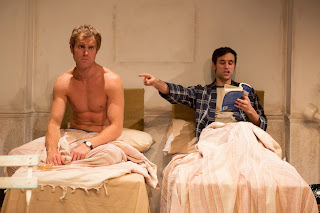 Rik Makarem (of Torchwood and Emmerdale fame), plays Toby who is a hypochondriac, Jewish artist about to leave New York to go to Paris on a scholarship. He meets Simon at an art house cinema and they have a one night stand. Simon, played by James Cartwright (of The History Boys and Hollyaks fame) is the total opposite. He is fit, athletic, with WASP-ish good looks. This unlikely pairing is potentially believable as Simon has come to New York from Florida seeking a break into radio. A few weeks later he seeks out Toby but a complication arises when Toby turns out to have hepatitis, which Simon soon develops as well. The rest of the play is about their recuperation in Toby's small studio flat and how two people who do not really know each other end up developing feelings for each other. 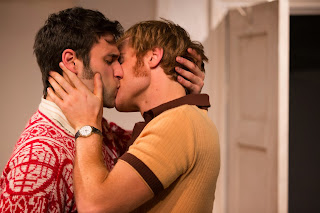 The idea of an infectious disease bringing two people together as comedy is a wonderful set up. The look and feel of the early 1970s New York is captured with a fine set by Philip Lindley and costumes of brown shirts, lumpy sweaters and flared trousers. But hopefully as the run progresses Makarem and Cartwright can do more to bring out the dramatically different backgrounds of their characters. This tends to dilute the comedy and the dramatic interest in the piece. And while it is nice to see Cartwright looks fine in underwear, here is hoping some more elastic can be found to keep it up. 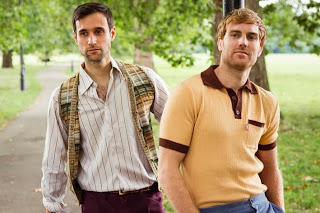 What makes this interesting viewing is how a few years later that Martin Sherman would write Bent where being gay and Jewish was given a much more dramatic and shocking context. This story about chance encounters feels as it it has inspired other gay themed stories such as Weekend (without the infectious diseases). Go see it for an appreciation of a different time and place, even if you may not see at first the point of it all.

Passing By is at the Tristan Bates Theatre until 30 November. It is a transfer of the Finborough Theatre production.