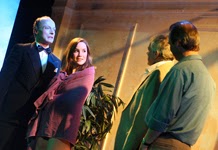 Keeler, currently showing at Charing Cross Theatre is a theatrical curiosity. Based on Christine Keeler's own book, Truth At Last, it gives her account of the Profumo affair. Fifty years ago this caused a scandal that led to a Secretary of State resigning and ultimately the downfall of a government.

But rather than provide new insight it highlights how insignificant her part was and the events and  those around her were far more interesting. While the intention is no doubt show how events circling around them overwhelmed them, without any understanding about the characters it is difficult to gleam anything but a vague history lesson on the topic.
Keeler is introduced as "that bird in the chair" and over the course of nearly two hours she moves from being an exotic dancer at a soho club to the occasional lover of the Secretary of State for War and a Soviet Naval attaché, and a hanger on at parties of the rich and powerful. No doubt if she were in her twenties today she might have her own reality show but this was a different time and place. She moves in these circles after being found by society fixer (and osteopath) Stephen Ward, who tells her how to act and behave. But you don't see any transformation on stage from a soho dancer to sophisticated good-time girl. For such a juicy story there is a surprising lack of any character development.

Once everything became public, Ward found himself shunned by the establishment that had relied on him for good times, girls and drugs and committed suicide. Ward here is played by director Paul Nicholas as a detached and manipulative voyeur and comes off the best of all the characters. There are some brief mentions of conspiracy theories but by the time this comes around most of the audience probably has lost interest.

There is a bit of nudity, and some dancers bending over and showing their buttocks, but it all seems a bit mechanical. If this piece arouses anything, perhaps it will be interest for the forthcoming musical from Andrew Lloyd Webber, Stephen Ward. The title of which suggests that the creative team has wisely focussed on the most interesting (and tragic) part of the story.

And if you're wondering what Keeler is up to nowadays (when not writing a new book), a recent story suggests the years have not been kind...

listen to ‘The Profumo Boo: Keeler at Charing Cross Theatre’ on Audioboo