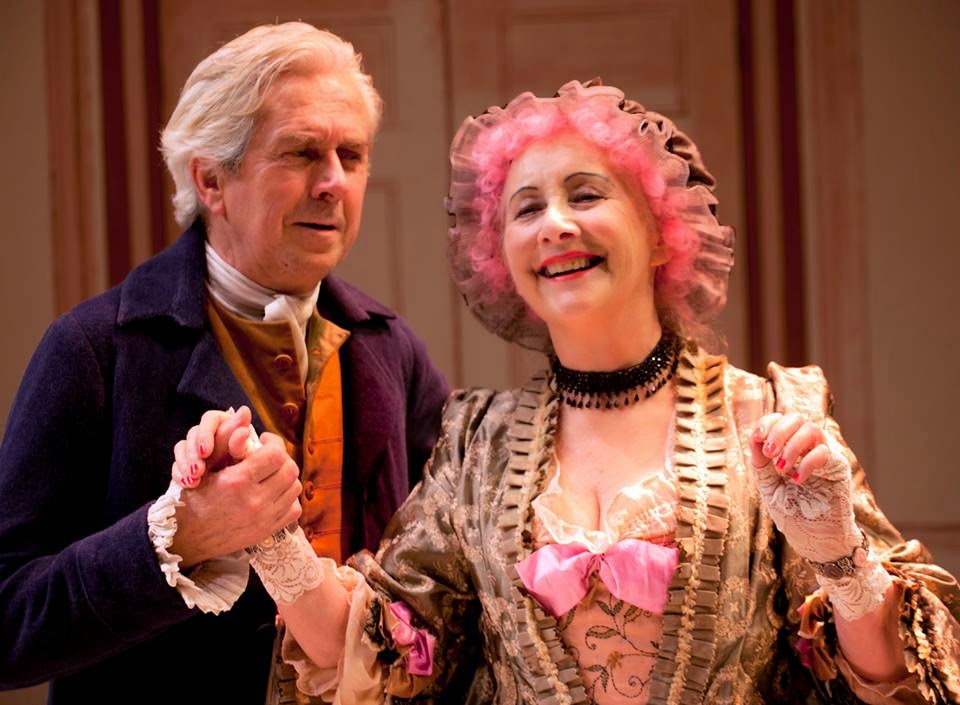 The Rivals at the Arcola Theatre is such a high energy production with a terrific cast, that the silliness of the plot and length of the evening whizzes by.

Sheridan's comedy of manners directed by Selina Cadell, is given an injection of fast pacing and a range of archetypes that seem to take inspiration from Comedia dell'arte to Pantomime and make the show a real treat.
The story is set in eighteenth century Bath, which was fashionable at the time to be a bit naughtier than you could in London while taking  the waters. 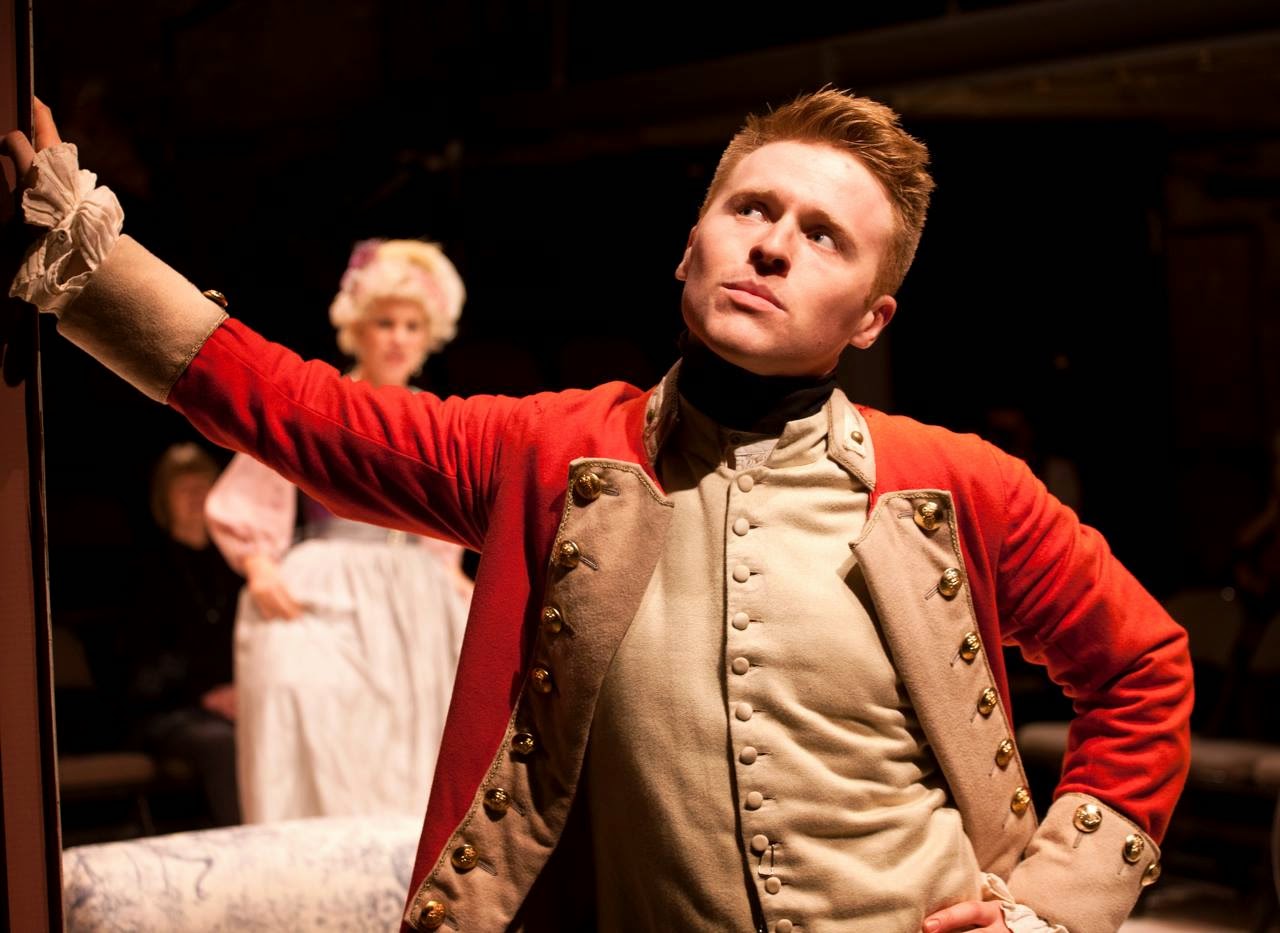 The two young lovers Jack Absolute and Lydia Languish yearn to have a tawdry love affair like the kind that are in the novels of the day. To court her Jack pretends to be a poor soldier who wants to elope. This excites Lydia but enrages her guardian, Mrs Malaprop, who has a habit of using the wrong word to express her opinions.

The rest of the story involves Lydia's two other potential suiters, farmer (and friend of Jack's) Bob Acres and poor Irish gentleman Lucius O'Trigger, but the conspiring of servants have meant that his letters end up with Mrs Malaprop, who would like to be rid of her niece Lydia so she could continue the affair.

Meanwhile Jack's other friend Falkland is in love with Julia, who is a relative of Jack's but has a nasty habit of being suspiciously jealous driving Julia to the point of distraction.

It is all frightfully silly, but carried off with such intensity, style and fun, that it is hard to resist. 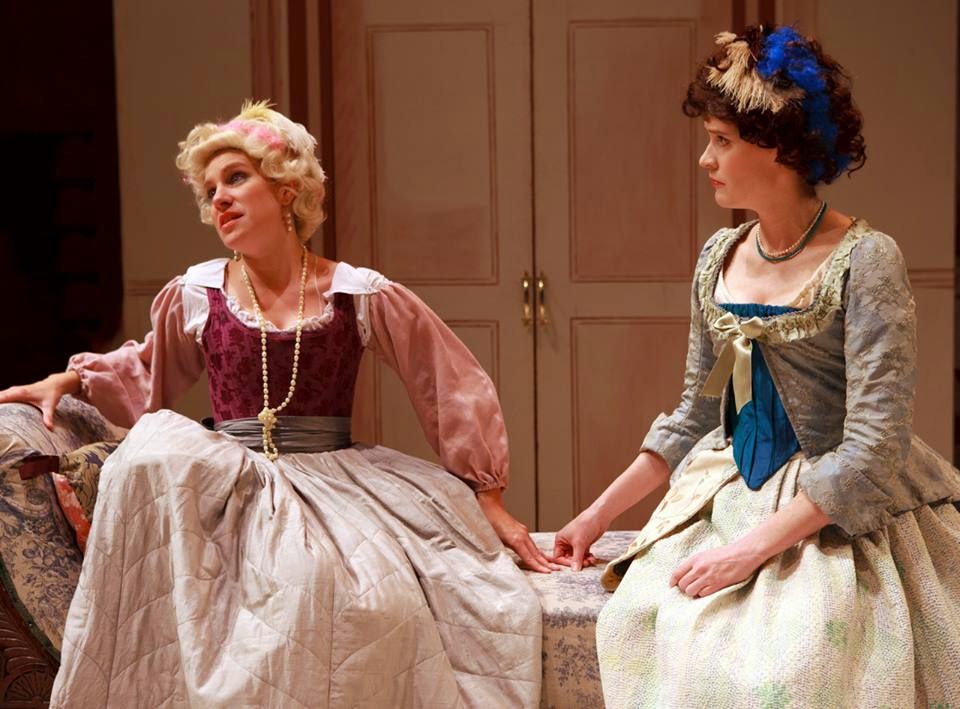 Jenny Rainsford is wonderful as the slightly crazy Lydia desperate for an illicit affair. She has a wonderful sense of comic timing and when she realises Jack's true identity (and that this is the man that her aunt wants her to marry anyway) her sense of disappointment is hilarious.

Iain Batchelor as Jack Absolute moves about the stage with such manic precision and vocal dexterity you can't help but admire him, and his vocal prowess.

Gemma Jones as Mrs Malaprop has a booming voice and carries off her bizarely hilarious and nonsensical opinions with such deadpan sincerity it is a delight to watch.

The cast break the fourth wall frequently (sometimes just to get people to hold their capes and coats). When you enter the theatre, the cast are already on stage flirting and chatting to the audience members.

Perhaps if more was made of this, it could have made the evening more fun and distracted the audience from the occasional lulls in the piece. Theatre from this period was often something that was going on while you were eating, catching up with friends, live tweeting and the like. Future productions could do more to encourage this sort of behaviour by keeping the lights up, serving pies and ale and encouraging a healthy banter between audience and players almost like it was a panto. I suspect this cast would have been more than up for it.

Still, this is only a minor quibble for what is a classy production. The Rivals runs until 15 November at the Arcola Theatre. Don't miss it.

First impressions with Johnnyfox follow (which may be factually inaccurate but I blame the programme notes as they were claiming this to be a Restoration-period comedy).