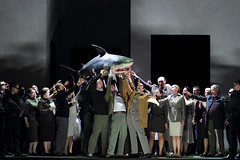 Rubber sharks, concrete walls spattered with blood and overacting extras carrying guns and wearing cheap sunglasses all becomes a bit too distracting for this early opera. Crete has never looked more unrecognisable. Audiences were not impressed either with the creative team resoundingly booed on opening night.
Still the singing was for the most part pretty good. Matthew Polenzani as Idomeneo sounds secure in his arias. Sophie Bevan as the Trojan Princess had a strong vocal presence. Malin Byström as Elettra was also equally strong and seductive. Counter-tenor Franco Fagioli as Idamante, Idomeneo's son appeared to struggle at first with his vocals but became more assured as the evening wore on.

Stylish and odd. This production highlights that all the elements need to come together to make a great opera production.

The production runs at various dates through to November 24.