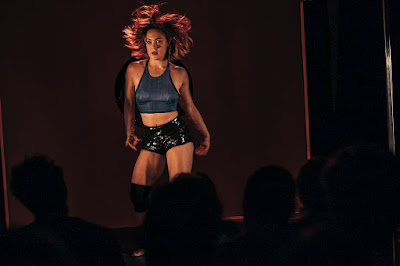 Tonight I’m Gonna Be The New Me, currently playing at the Soho Theatre is a theatrical endurance piece, both for the performers and the audience as it attempts to describe a relationship, or a relationship re imagined.

It should be part of Soho Theatre’s programme of weird shit to see in the West End. It’s alienating, amusing and infuriating. So depending on your frame of mind you’re going to love it or think you are trapped. I suspect the intention is to feel both. Thankfully it only lasts a little over an hour.


Performed by theatrical group Made In China - which consists of Tim Cowbury and Jessica Latowicki - it is presented as a one woman show with the shadowy Tim standing in the control box, venturing out only to get a beer.

It starts with an extended dance sequence that combined with sound effects seemed like it was depicting a woman trapped in a washing machine. With all the gyrations and arms spinning as if they were about to pop out of their sockets, it looked like something a physiotherapist wouldn’t recommend. It then moved into a series of monologues and random riffs on a relationship that is partly real and partly fiction.

The central message seems to be a relationship is never what you think it is going to be, and definitely not what it is like in the movies.

There is audience participation, weird stuff and a lot of movement. You know you’re in for a fun time when the set includes a fan that can blow hair about in a dramatic fashion.

I get the feeling that it probably played better at the Edinburgh Fringe where the unique and weird does shine out like a beacon of hope amongst the sea of earnest mediocrity. But it still felt like a forty minute concept stretched to over an hour.

It’s been running for a week and concludes on Saturday 26 October. See it with somebody you’re weirdly attracted to.