The lights are on: hamlet is dead. no gravity. @arcolatheatre 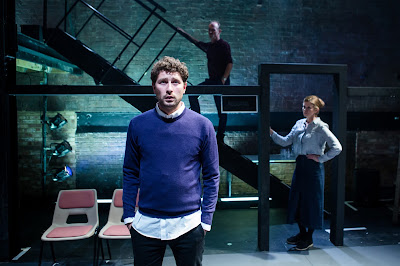 The old keep living and the young are dying. It is all a bit random and unpredictable with these birthdays, deaths and marriages in hamlet is dead. no gravity. It is one of four pieces playing as part of the Volta International Festival at the Arcola Theatre.

The work by German writer Ewald Palmetshofer is both fascinating, challenging and amusing. The work deals with the premise about how people tend to tense up in uncomfortable situations, be it the mother who longs for her mother to be dead, a marriage of convenience, an unexplained death or a brother and sister who seem awfully close. Things gradually build to an unexpected climax.


Sometimes a well-written play just smacks you out of your complacency. It is funny, and there are various scenes where you are reminded that you are watching a play (almost as if the actors are reading the stage directions). But what lingers long after you have left the theatre is how the petty arguments and point-scoring is so important when you have little else to worry about.

It’s an ensemble piece, but each of the cast members gets to shine with their own hilarious monologue, which comes across as if it is a conversation just to you (albeit an awkward one).

The Volta International Festival is an opportunity to bring together award-winning writers from across the world, translating their works into English for the first time.

With a cast of 14 actors staged in both spaces of the Arcola, it is an opportunity for collaboration between award-winning writers from across the world with British artists.

There are four pieces that explore the themes of power, abuse, guilt and memory. Discounts apply if you catch more than one (and it is possible to see more than one piece in an evening).

The four works run through to 19 September however hamlet is dead. no gravity concludes on 12 September.