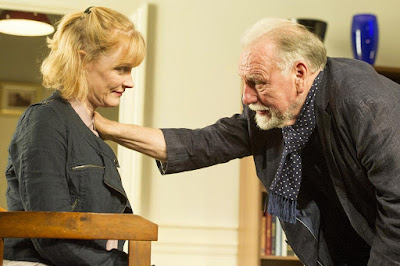 The Father is the story of one man as he “looses his leaves,” and through a series of fragmented scenes it is left to the audience to piece together what is happening to him. But the premise of jagged short scenes actually proves alienating and the dialogue is often unbelievable.

What we learn over the course of this piece is that Andre is 80 years old. He was once a tap dancer. He lives with his daughter Anne and her husband Antoine. Or he was an engineer whose daughter Anne lives in London with her new lover. Bit by bit fragments of his life are colliding as age takes its toll. Are those around him helping him or have they other plans?


The trouble is, there are no surprises here. The drama is an obvious descent down forget my memory lane, and frequently the dialogue (whether real or imagined) is unconvincing in what anyone would say to someone suffering dementia.

Perhaps something is lost in the translation. It is set in a French apartment, but with its beige drabness it could easily pass for a London flat. One by one the pieces of furniture disappear. At first you don’t miss the cheap lamp or the extra sofa, but as a metaphor for memory loss (or stage hands causing trouble) it is intriguing.

Given dementia is something for anyone living into old age can look forward to, it is great that there are stories being told about it. And the piece is exceptionally well acted by the cast, led by Kenneth Cranham.


This one doesn't quite hit either mark successfully. The Father runs at Wyndhams Theatre through to 21 November