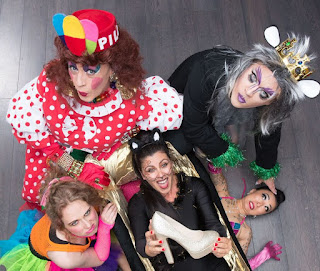 
The story involves Dick inheriting a talking cat with a penchant for shoes. Heading off to London they meet Dame Choo of Shoes the Chemist. Dick falls in love with Dame Choo’s daughter Jenny. But Jenny seems to be hard to please. Meanwhile there is King Rat who between buying up properties and taking away affordable housing he is running for mayor.

It is topical and funny, there is a nice balance of cast members of both genders, but there is an awful lot of plot. It could have much more potential if it served as a showcase of the talents of its eccentric cast. There are also some wonderful costumes for Paul L Martin as Dame Choo, but the sum does not feel more than its often good parts.

Kitten in Heels is at the Lost Theatre on Saturday 12 December and then Friday 18 December through to Sunday 20 December.