Mister cellophane: If I Were Me @sohotheatre 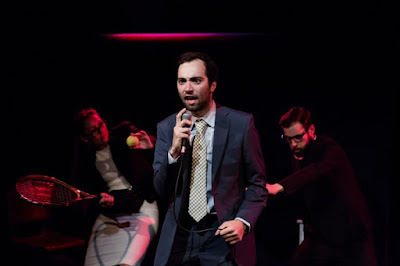 Alienation, tennis balls, struggling daffodils, piles of post it notes. It is all part of the surreal world in If I Were Me.

The piece is billed as the darker consequences of finding a new version of yourself. Selling a product and selling yourself as a product blur together.

If at any point you get lost in the piece, it doesn't really matter. Something weird is going to happen and that will either make you more confused or set you straight.


Upon arriving upstairs at the theatre, someone is hoovering the floor and there are tennis balls on some of the seats. Most of us sat on seats without balls on them but the purpose of tennis balls would only sort of become clearer later in the piece.

The piece presents us with Philip. He is an intern at an advertising agency. He struggles with anyone noticing him in the office. There is a wonderful scene where Hannah, a woman he is trying to ask out on a date makes him get on the floor. She then leaves him there.

A chance encounter with a bearded motivational speaker called Trevor forces him to make some changes.

But on the sidelines there is another person watching the story. While Philip is struggling to be himself, she decides to step in and be him instead.

It's all a bit silly, but part of me wished it went even further to really freak out the audience. After all if we are going to be at a Soho Rising event, which showcases new artistic talent, we probably could be made a bit more uncomfortable.

The piece runs at the Soho Theatre only until 26 March but worth a look. And don't be afraid to move the tennis balls.