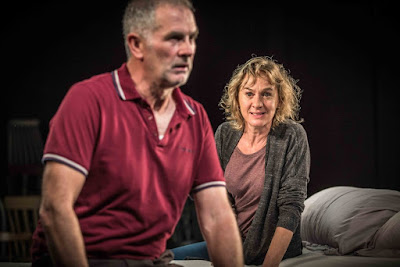 The central message from Unfaithful by Owen McCafferty is that it is still an older persons world. The older generation is screwing the younger generation over and over. They get the early retirements, they clinched Brexit, and they get free TV licences. All at the expense of the younger generations who will pay for it. And here those youngsters are also fair game for sex.

For fifty-something couple Tom and Joan, it’s too late to do anything else. They are stuck with each other. But the play opens with Tom confessing that he had a sexual relationship with a younger woman. So Joan seeks revenge sex by hiring a male escort.

Meanwhile Tara is bored working at the checkout at Tescos and her frustrated her partner Peter - a male escort - doesn’t have a day job.

And thus begins this four hander about relationships. It is full of dirty talk about eating this and fucking that. But mostly it is middle-aged sex fantasy and I suspect an excellent show to catch if you’re over fifty. For the rest of us it is a harrowing experience. 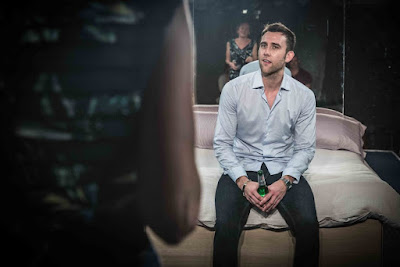 Sean Campion as plumber Tom and Niamh Cusack as his wife (and dinner lady) Joan, get the best bits (so to speak). As a vehicle to spit out the regrets of life they are focussed and funny.

As the fresh meat Matthew Lewis as Peter and Ruta Gedmintas as Tara have less to say (and do). But Tom and Joan only want them for their bodies anyway.

Earlier in the week I caught the National Theatre’s excellent (albeit expansive) production of The Deep Blue Sea. It is about lust, belonging and new beginnings. Catching this in the same week felt like a continuation of the same theme, albeit with filthier prose.

It is also short at 75 minutes straight through so you can forgive it for stretching credibility while attaining brevity.

Directed by Adam Penford with a simple yet slick set by designer Richard Kent, Unfaithful is at the shabby chic Found 111 until 8 October.

In a slow news week, Niamh Cusack wearing a badge expressing admiration for a naughty word also received attention. If they sold them at the bar I suspect they would be a hit. 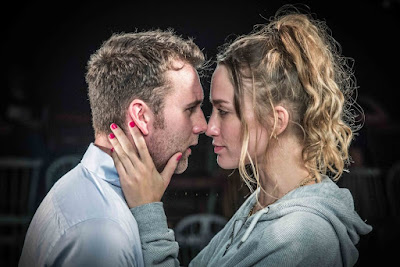