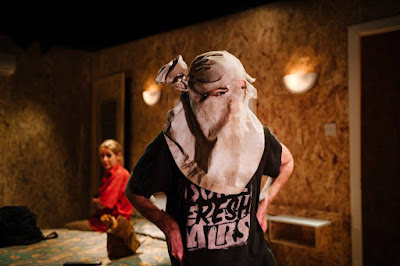 Angela Betzien’s hard-hitting play The Dark Room at Theatre 503 explores the underbelly of neglect and violence in outback Australia. Or the Northern Territory to be precise. But this isn’t the Northern Territory famous for its obscure newspaper headlines. This is a much darker, isolated place where the people meant to protect vulnerable people mistreat them instead.

It’s billed as a disturbing psychological thriller but the resemblance to real events makes it feel more like a horror show. Betzien wrote the play after witnessing first-hand the shortage of accommodation for children in care in these communities. In the end you leave the theatre feeling shocked and numb from what you’ve seen.

Set in a run-down motel room, a series of characters come together to tell the story of stretched resources, limited patience and a tyranny of distance. Time moves forward and back as this bleak plywood motel room as each character recalls another. 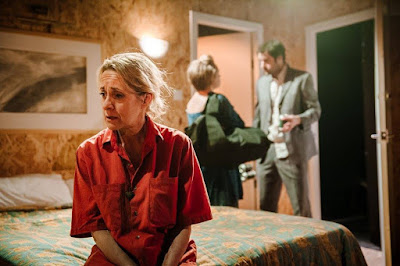 It opens with youth worker Anni (Katy Brittain) bringing a disturbed young girl to a motel to stay the night on the way to an unknown location.

The girl (Annabel Smith) enters the motel room  wearing a hood. The scene in reminiscent of the the hoods authorities forced aboriginal youths to wear in the Northern Territory.

She’s filthy and needs a wash. She’s experienced something horrific but it’s unclear what that might be. There’s a large knife and lots of dirty talk. Between outbursts and fits of rage a story begins to emerge. 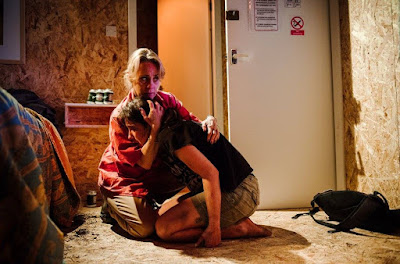 This piece attempts to tell a bigger story about institutional neglect. But it’s these two characters that create the biggest impression. Both performers create a tense and uncomfortable dynamic. Brittain’s portrayal of Annie is also the closest to a sympathetic and understanding character in the piece.

Directed by Audrey Sheffield, The Dark Room is at Theatre 503 until 2 December.